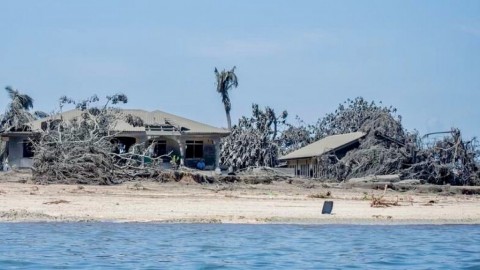 This grant will help the government with its immediate relief efforts. (Photo: Tonga's National Emergency Management Office)
Manila: The Asian Development Bank (ADB) today announced a $500,000 (1.13 million pa’anga) grant to the Government of Tonga to help restore life-sustaining services following the extensive damage from an undersea volcanic eruption and subsequent tsunami in Tonga and around the Pacific.

"An estimated 84% of Tonga’s population was affected by this twin disaster," said ADB Director General for the Pacific Leah Gutierrez in a press release on Tuesday.
BERITA TERKAIT

"This grant will help the government with its immediate relief efforts which are focused on the provision of food; nonfood items, including water containers, hygiene kits, and household items; shelter; and clean-up of the ashfall," Gutierrez added.

The Hunga Tonga–Hunga Ha’apai undersea volcano, located about 65 kilometers north of Tonga’s capital Nuku’alofa, erupted on 15 January which produced an ash cloud that rose to 30 kilometers and launched an estimated one cubic kilometer of material into the atmosphere. Ashfall has impacted all Tonga’s island groups, resulting in buried crops, damaged public infrastructure and houses, and contaminated water supplies. The death toll remains at four. The Government of Tonga declared a state of emergency on 19 January.

The islands of ‘Atata, Mango, Fonoifua, and Nomuka experienced extensive damage. Residents from these islands were moved to evacuation centers on other islands. There are reports of damage to government buildings, including health centers in ‘Eua and Ha’apai. Access to safe drinking water is one of the highest concerns. Transport has been impacted, particularly erosion of coastal roads and some reported damage to outer island ports.

The $500,000 grant comes from ADB’s Asia Pacific Disaster Response Fund and is in addition to the $10 million quick-disbursing contingent grant financing that ADB provided to Tonga on 21 January for tsunami recovery.