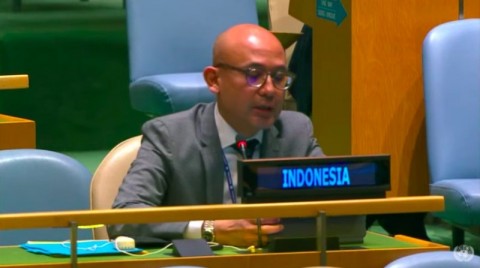 Representing the Committee on the Exercise of the Inalienable Rights of the Palestinian People (CEIRPP), Ambassador Arrmanatha expressed concern over the designation of 6 Palestinian organizations as terrorist entities by the Israeli authorities.


"The Bureau of the Committee joined the Secretary-General, the High Commissioner for Human Rights, the European Union and other  6 international human rights organizations in publicly expressing deep concern at Israel’s decision of 22 October designating six human rights and humanitarian Palestinian civil society organizations as terrorist entities," he stated.

According to him, some of these organizations are long-standing, reliable partners of the Committee, as well as of the United Nations, in advocating for the protection and promotion of the human rights of the Palestinian people.

The Indonesian Ambassador revealed that, on December 7, the Committee organized an event where representatives from Palestinian and Israeli civil society called on Member States to hold Israel accountable for its actions and to continue giving a platform to the voices that the Government of Israel is trying to suppress.

To date, the Israeli Authorities have not made public substantial evidence against these six Palestinian organizations.

"We reiterate that civil society organizations must be allowed to work unhindered in the implementation of their mandate," he added.

It is hoped, he said, that the next ministerial meeting of the Middle East Quartet will soon re-launch the peace process.

"The current course must be diverted and redressed without delay toward ending the Israeli occupation that began in 1967, implementing a just solution based on international law and relevant United Nations resolutions that ensures two States, Israel and Palestine, live side by side in peace and security along the pre-1967 lines and with East Jerusalem as the capital of the Palestinian State," he stated.

"The Committee stands ready to assist and garner the support needed to advance the process," he concluded.