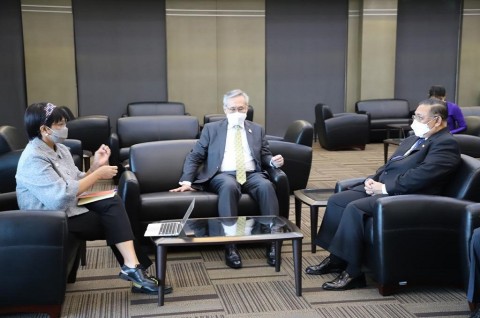 Indonesia will continue to hold discussions with both parties

"This is part of Indonesia's shuttle diplomacy to discuss and find the best solution for the current situation in Myanmar," said Minister Retno the virtual press briefing after the visit.
BERITA TERKAIT


According to the Indonesian foreign minister, Indonesia is committed to holding discussions with all parties in the country, including Myanmar Military and Committee of Representing Pyidaungsu Hluttaw (CRPH).

"Communication with CRPH has been quite intensive," said Minister Retno.

During her meeting with the Junta's top diplomat, Retno said that Indonesia is concerned about the ongoing politicial crisis in Myanmar and underscored that safety and wellbeing of Myanmar people must be top priority.

Moreover, she also asked all parties to exercise restraint to avoid casualties and emphasized the importance of an inclusive democratic transition process.

"All ASEAN member countries need to follow principles set out in the ASEAN Charter," she stated.

"We will continue to hold discussions with both parties," she concluded.