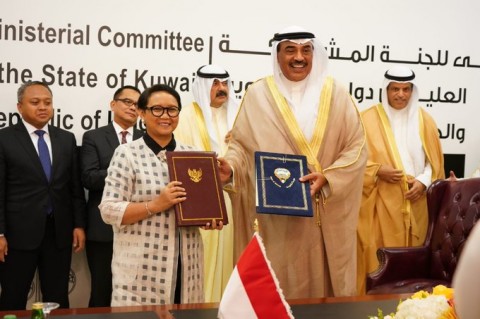 "We agreed to focus on strengthening trade, investment and manpower cooperation," the Indonesian top diplomat said on her official twitter account on Monday evening.
BERITA TERKAIT

The two governments also agreed to work closely on the issue of Palestine, counterterrorism and promotion of toleance. The two ministers also witnessed the signings of several memorandums of understanding (MoUs).

They are MoU on Visa Exemption for Diplomatic and Service Passport, MoU on Diplomatic Capacity Building, MoU on Research and Higher Education Cooperation as well as MoU on Oil and Gas Cooperation.

Kuwait is one of the first and largest energy partners for Indonesia with a value of oil and gas imports reaching US$214 million in 2018. Overall, the trade value between the two countries reached more than US$403 million last year.

KUFPEC, the Kuwaiti oil company has been a long partner for Indonesia in exploring its oil and gas sector potentials since 1980s. Indonesia is currently focusing on exploring 10 main oil and gas source points from Sabang to Merauke with a total estimated value of oil and gas resources of around 10 billion in equivalence with the crude oil barrel.