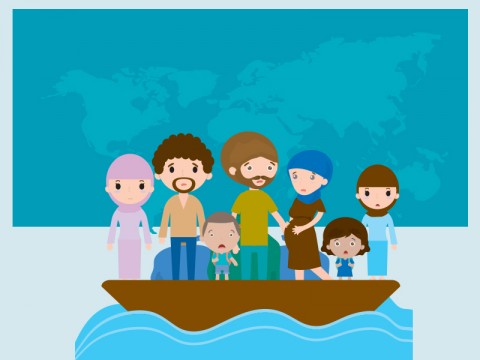 Geneva: UNHCR, the UN Refugee Agency, is today urging world leaders to step up their efforts to foster peace, stability and cooperation in order to halt and begin reversing nearly a decade-long trend of surging displacement driven by violence and persecution.


This is a further four percent increase on top of the already record-high 79.5 million at the end of 2019.

The report shows that by the end of 2020 there were 20.7 million refugees under UNHCR mandate, 5.7 million Palestine refugees and 3.9 million Venezuelans displaced abroad.

Another 48 million people were internally displaced (IDPs) within their own countries.

A further 4.1 million were asylum-seekers.

These numbers indicate that despite the pandemic and calls for a global ceasefire, conflict continued to chase people from their homes.

"Behind each number is a person forced from their home and a story of displacement, dispossession and suffering. They merit our attention and support not just with humanitarian aid, but in finding solutions to their plight," said the UN High Commissioner for Refugees, Filippo Grandi, in a press relase on Friday.

"While the 1951 Refugee Convention and the Global Compact on Refugees provide the legal framework and tools to respond to displacement, we need much greater political will to address conflicts and persecution that force people to flee in the first place,” said Grandi.

While people continued to flee across borders, millions more were displaced within their own countries.

Another 33,800 refugees were naturalized by their countries of asylum.

"Solutions require global leaders and those with influence to put aside their differences, end an egoistic approach to politics, and instead focus on preventing and solving conflict and ensuring respect for human rights," said Grandi.