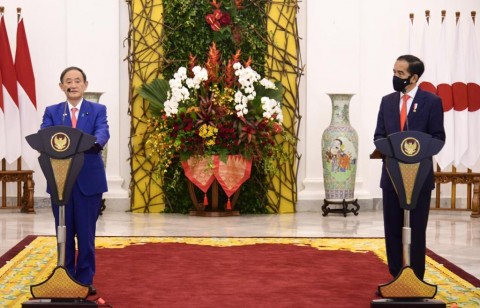 If realized, it can bring peace to the region. Freedom, openness, law supremacy can also be upheld," Prime Minister Suga said during a press conference here on Wednesday.
BERITA TERKAIT

During the meeting, the Japanese leader admitted that Indonesia is an important country in the region, especially in Southeast Asia.

In addition to that, the Liberal Democratic Party (LDP) politician said that he is committed to continuing to work with Indonesia.

"Japan will cooperate with Indonesia for regional peace and prosperity, based on the strategic partnership of our two countries, which is strengthened by my visit to Indonesia this time," said Prime Minister Suga during a joint press statement after the summit meeting.

Prime Minister Suga's visit is part of his first overseas trip after taking office. Besides Indonesia, he also conducted a two-day visit to Vietnam. He followed follow in predecessor Shinzo Abe’s footsteps by making the two Southeast Asian nations the destination for his first foreign trip.