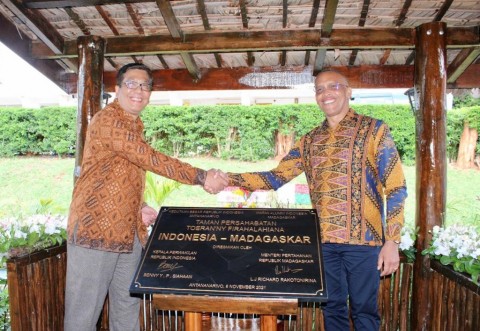 Defense Minister Richard is the Chairperson of the Indonesian Alumni Association (IAI) in Madagascar.
BERITA TERKAIT

The Indonesia-Madagascar Friendship Park is decorated with a Kalimantan stilt house. The ancestors of many people in the African country are originated from Kalimantan island.

In addition, the plants in this park can also be found in Indonesia such as hibiscus, papaya, and heliconia. There is even an Indonesian rickshaw which in Madagascar is called pus-pus.

As a symbol of the friendship between the two countries, stone monuments of the flags of Indonesia and Madagascar have also been made.

"I as the President of the Indonesian Alumni Association and also the Minister of National Defense of the Republic of Madagascar feel honored and touched by the goodwill of Mr. Benny Siahaan as the Head of the Indonesian Representative in Madagascar who seeks to create friendship and brotherhood in Wisma Indonesia," said Defense Minister Richard in a press release on Monday.

"I hope that the friendship and brotherhood of Indonesia and Madagascar can last forever and that the cooperation between the two countries can continue to be improved," Defense Minister Richard continued.