ASEAN, US Reaffirm Commitment to Advance Their Strategic Partnership 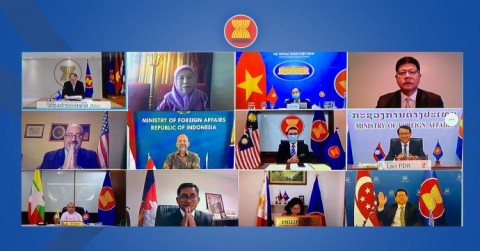 Jakarta: ASEAN and the U.S. reaffirmed commitment to further advance their strategic partnership for mutual benefit at the 34th ASEAN-U.S. Dialogue held on Thursday via videoconference.

Senior diplomats from ASEAN and the U.S. were encouraged by the growing cooperation between the two sides across the three pillars.

They were pleased to note that significant progress was made in the implementation of the current Plan of Action (2021-2025), following its adoption last year.
BERITA TERKAIT


Both sides underscored the importance of collaborative efforts undertaken in addressing the COVID-19 pandemic, through a series of high-level engagements since April last year, as well as initiatives such as the Billion Futures and the U.S.-ASEAN Health Futures.

ASEAN and the U.S. looked forward to the convening of the ASEAN-U.S. Ministerial Meeting and the 9th ASEAN-U.S. Summit in August and October 2021, respectively, as well as the upcoming Special ASEAN-U.S. Foreign Ministers’ Meeting scheduled for May 25.

The meeting touched upon key regional issues of common concerns, including the South China Sea and the Korean Peninsula.

"Senior officials from both sides reiterated the significance of the ASEAN Outlook on the Indo-Pacific in guiding the partnership forward and agreed to explore cooperation in the key areas identified therein," said the ASEAN Secretariat in a press release on Friday.

ASEAN Senior Officials or their representative, as well as the Deputy Secretary-General for ASEAN Political Security Community were in attendance.

"The ASEAN-U.S. Dialogue remains as a key mechanism in discussing strategic issues of common concerns between the two sides," it stated.