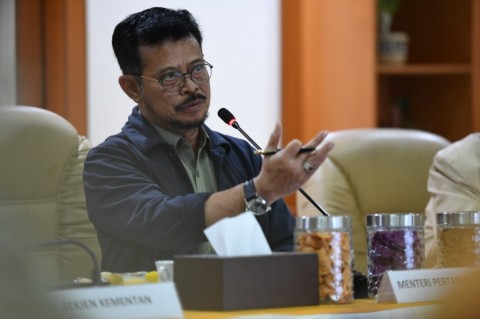 Ministers and high-level delegates from across Asia and the Pacific met at the 36th Asia and Pacific Regional Conference (APRC) convened by FAO on March 10-11 in Dhaka, Bangladesh, to discuss ways of improving nutrition, lives, and livelihoods in the wake of the global pandemic, according to a statement from FAO Indonesia received here on Friday.
BERITA TERKAIT

The meeting also discussed ongoing climate and severe weather-related threats and ways to tackle diseases and pests that are affecting crops and livestock in the world’s most populous region.

Improved ecosystem responses in the Pacific Islands emerged as another key topic.

In his speech, Limpo highlighted the lessons learnt from the global COVID-19 pandemic and stressed the importance of building a resilient and sustainable national agri-food system.

"The global COVID-19 pandemic has taught us the importance of building a resilient and sustainable national food and agriculture system," Minister Limpo remarked.

"We believe that this proposal will contribute to creating better economic growth in the region," he stressed.

Meanwhile, Prime Minister of Bangladesh Sheikh Hasina highlighted her country’s achievement of self-sufficiency for several essential foods while noting that agriculture remains the "backbone" of the economy, providing livelihoods for 40 percent of the labor force.

She appealed for "achieving food security and nutrition in the real sense." Hence, she called for collaboration among countries in the region in areas, such as education, biotechnology, and green investments.

FAO Director-General, Qu Dongyu, attending the regional conference in person, acknowledged the toll that the global pandemic had inflicted on lives and livelihoods of people of Asia and the Pacific.

Dongyu noted the region still had a long way to go to eliminate hunger and improve nutrition while drawing attention to a FAO report from last year that found 40 percent of the population being unable to afford a healthy, nutritious diet.

Reversing many years of progress, hunger in Asia and the Pacific is on the rise again, and inequalities are increasing, especially between rural and urban populations, while too often women and youth are being left behind.

"The pandemic has forced us to reconsider our priorities and approaches and has highlighted the importance of more sustainable and resilient societies, as well as of the urgency to achieve the Sustainable Development Goals to secure food, health, education, a healthy environment, and a decent life for all," the FAO director general noted in his statement to the conference.

"This has led to a movement to transform the region’s agrifood systems and make them more efficient, inclusive, resilient, and sustainable," he added.

A key area of interest in the APRC is the digitalization of agriculture and food processes that are sweeping across Asia and the Pacific, and the potential they have for the region and the world, if scaled up further, to help transform agrifood systems in ways that also benefit smallholder farmers.

The Asia and Pacific Regional Conference is convened every two years to seek the views and direction of the governments of FAO member nations in the region, and it has expanded to become more inclusive of other actors, such as civil society organizations and the private sector.