Two Koreas to Hold Summit at Border in April 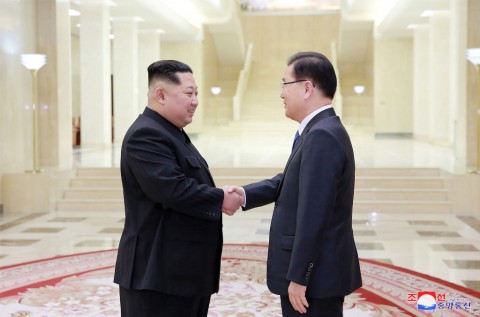 "The South and the North agreed to hold the third summit at Panmunjom in late April," said Chung Eui-yong, the national security adviser to South Korean President Moon Jae-In, referring to the truce village at the heavily-fortified border.

If realised, the summit will be the third meeting between the leaders of the two Koreas, which technically remain at war after the 1950-53 Korean War ended with an armistice instead of a peace treaty.

The previous two summits were held in 2000 and 2007, respectively, under South Korean presidents Kim Dae-jung and Roh Moo-hyun who both advocated dialogue with Pyongyang.

They both met with Kim's father, Kim Jong Il.

The two Koreas also agreed to open communication hotline between Moon and Kim to "defuse military tension and to have close coordination," Chung said Tuesday.

The two leaders will have their first phone conversation before the planned summit, he added.

North Korea also pledged that it would freeze its nuclear and missile testing programme during the period of dialogue. (AFP)