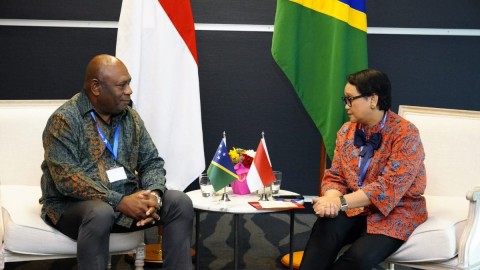 "Discussed cooperation on tourism industry with Minister for Tourism and Culture of Solomon Island in sidelines of Pacific Exposition, Auckland (12/07)," Minister Retno said on her official twitter account this morning.
BERITA TERKAIT

"We agreed to strengthen our cooperation on tourism industry,  including through capacity building," she noted.

Held from July 11 until July 14, this year's Pacific Exposition was officially opened by Indonesian Foreign Minister Retno Marsudi and her Pacific counterparts on Friday morning.

Organized in collaboration between Indonesia, Australia, and New Zealand, the series of events aims to accelerate the improvement of regional cooperation in the economic, tourism and cultural sectors.

At the Pacific Tourism Forum, hundreds of business players from a number of sectors such as infrastructure, communications, and tour operators gathered to discuss a collaborative network on the establishment of One Pacific Destination framework for the Pacific region.

"This morning, together with all Leaders and Ministers of Pacific Countries, I officially opened the first Pacific Exposition 2019 in Auckland," Minister Retno said.

"Pacific Exposition 2019 will connect the dots between the 17,000 Indonesian islands and the thousands of Pacific islands, Australia and New Zealand," she remarked.