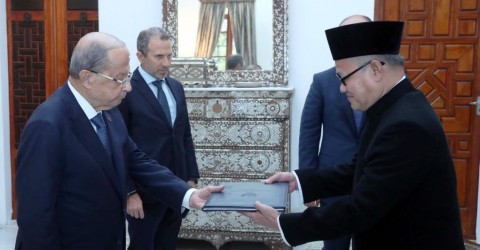 The credentials submission marked the full duty of Ambassador Hajriyanto Y. Thohari as Indonesian Ambassador Extraordinary and Plenipotentiary for the Republic of Lebanon.
BERITA TERKAIT

"??Welcoming Ambassador Thohari, President Michel Aoun expressed his warmest regards and his full support for good relationship between Indonesia and Lebanon, particularly in increasing economic and trade cooperation between the two countries," the Indonesian Embassy in Beirut (KBRI Beirut)  said in a press statement released on Wednesday.

At the ceremony, Ambassador Thohari expressed his gratitude and high appreciation to the President of Lebanon for his acceptance and reception. Additionally, he delivered a warm greeting from Indonesian President Joko Widodo.

Aside from Ambassador Thohari, President Aoun also received credentials from 8 (eight) other ambassadors from other countries who will serve in Lebanon, namely; Venezuela, Peru, Bosnia Herzegovina, Guatemala, Portugal, India, New Zealand, and Georgia.

Indonesian Ambassador in Beirut, Hajriyanto Y. Thohari is formerly a Deputy Chair of the Indonesian Representative Assembly (MPR) for the 2009/14 period.

Lebanon is the third country that acknowledged Indonesian independence, precisely on 29 July 1947 during the reign of President Bechara el Khoury. Meanwhile, the diplomatic relationship between the two countries have been initiated since the 1950s by accrediting Indonesian Ambassador for Cairo and Lebanon, and since 1996, the Indonesian Embassy was officially established in Beirut. This high historical value is the basis principle for Indonesian Embassy in Beirut in carrying out its diplomatic mission.

Additionally, Lebanon can be targeted as one of the non-traditional markets for Indonesian products. In Indonesian Embassy's record, Indonesian and Lebanon have secured US$117 million in the total of bilateral trade in 2018, with a 98 percent surplus for Indonesia. The number shown an increase approximately by 7 percent from 2017. On the other hand, the number of Lebanese tourists in Indonesia reached around 5,228 in 2018.