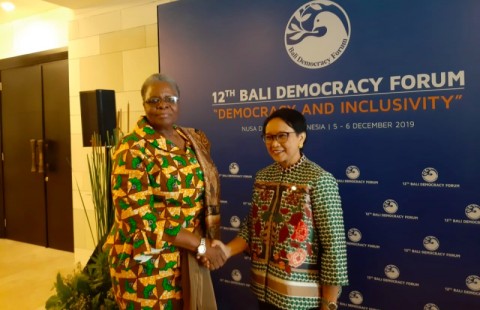 The spotlight of this ministerial annual forum is the discussion on women empowerment. (Photo:Medcom.id/Marcheilla)
Jakarta: Foreign Minister Retno Marsudi held a bilateral meeting with her Namibian counterpart Netumbo Nandi-Ndaitwah on the sidelines of the 2019 Bali Democracy Forum. Namibia extended an invitation for Indonesia to attend the inauguration for Women Empowerment Center in the country next year.

"Indonesia is seen as a country that is able to make women's empowerment a mainstream issue," Retno said here on Thursday, December 5, 2019.
BERITA TERKAIT

"We hope Namibia is willing to support the PTA," Retno added.

Representatives of ninety states and 7 international organizations are participating in the 12th BDF held by the Government of Indonesia in Bali Nusa Dua Convention Center (BNDCC), on December 5-6 2019. The spotlight of this ministerial annual forum is the discussion on women empowerment.

Under the theme of “Democracy and Inclusivity", the 12th BDF also attracts representatives of women, youths, civil societies, experts and the private sector. Their contributions are important to give the Forum a comprehensive perspective on inclusive democracy.