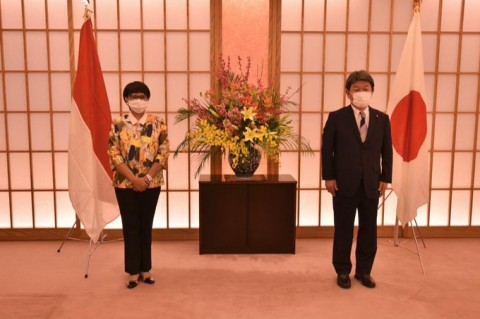 Jakarta: Indonesian foreign Minister Retno Marsudi held a bilateral meeting with her Japanese counterpart Toshimitsu Motegi during her visit to Japan on Monday.

"Our job is to fill Indonesia-Japan Strategic Partnership with concrete cooperation for the benefit of our two people as well as regional peace and stability," said the Indonesian foreign minister on her official twitter page on Tuesday.
BERITA TERKAIT


According to Retno, the two ministers discussed bilateral cooperation on health and post-pandemic economic recovery during the meeting.

Indonesia's top diplomat, together with Indonesian Defense Minister Prabowo Subianto arrived in Tokyo, the capital of Japan, on Sunday.

Their main agenda is to hold the 2+2 Meeting between the foreign ministers and defense ministers of the two countries.

"This visit reflects the importance of the Indonesia-Japan Strategic Partnership which has continued to develop since 2005," stated the Indonesian Foreign Ministry in a press release on Friday.