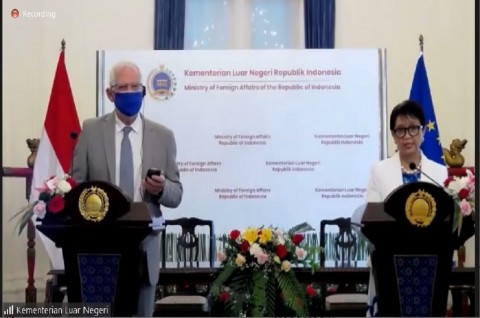 "This is his first visit to Indonesia," said Indonesia's top diplomat during a joint press statement after the bilateral meeting.
BERITA TERKAIT

From Tuesday to Friday, Borrell will hold discussions with the Indonesian government and will have meetings at the headquarters of the Association of Southeast Asian Nations (ASEAN).

According to the regional bloc, the visit demonstrates the EU's wish to deepen relations with Indonesia, one of the world's largest democracies and economies, which will hold the G20 Presidency in 2022 and the ASEAN Chairmanship in 2023.

The visit also comes in light of the upgrade of EU-ASEAN relations to a Strategic Partnership, the recent adoption of Council Conclusions on an EU Strategy for Cooperation in the Indo-Pacific, and ongoing efforts to address the military coup and the ensuing political crisis in Myanmar.

While in Indonesia, the High Representative will also meet the Secretary-General of the Association of Southeast Asian Nations, Lim Jock Hoi, and the ASEAN Committee of Permanent Representatives.

During his visit, the High Representative will inaugurate the new premises of the EU Delegation to Indonesia and, following the enhancement of EU-ASEAN relations to a strategic partnership, oversee the official upgrade of the EU Mission to ASEAN to a fully-fledged EU Delegation.

On Thursday, he will give a speech at the Centre for Strategic and International Studies on the EU Strategy for Cooperation in the Indo-Pacific.