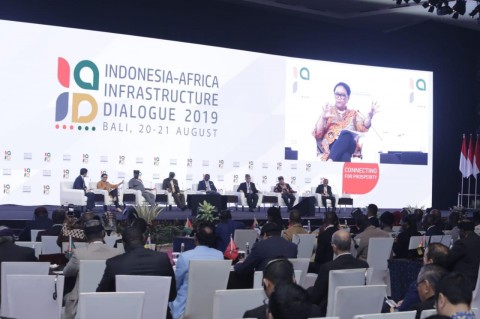 This event is held on August 20-21 (Photo: MoFA)
Jakarta: Foreign Affairs Minister Retno Marsudi stated that Indonesia and African countries are committed to advancing and developing together.

“In addition to implementing foreign policy, nowadays Ministry of Foreign Affairs is also tasked with carrying out economic diplomacy," Minister Retno said in a press statement released on Wednesday.

"To serve this function, MoFA has involved related ministries and state-owned companies in a comprehensive mission," she added.

Indonesian President Joko Widodo officially opened the 2019 Indonesia-Africa Infrastructure Dialogue (IAID) in Nusa Dua, Bali on Tuesday. This event is held on August 20-21, following the moment built at the Indonesia-Africa Forum (IAF) in 2018.

The 2019 IAID was attended by approximately 700 participants comprising business leaders, policy makers, senior government officials, and other stakeholders from Indonesia and Africa. The participants discussed concrete efforts that can be attempted in several fields, including strategic industry and economic diplomacy, connectivity, social infrastructures and tourism, energy and mining, funding scheme, trade cooperation, and development cooperation.

During the event, Indonesia proposed to negotiate a Preferential Trade Agreements (PTAs) to boost trade with some African countries like Mauritius and Djibouti. These PTAs will reduce trade tariffs, which in turn will drive trades and contribute to economic growth.

Indonesia's economic cooperation with African countries keeps increasing and developing significantly. In 2018 alone, the trade value between Indonesia and Africa has reached over IDR 156 trillion (USD 11,06 billion), showing an increase by 25% from the previous year. Indonesian businesses in Africa also keeps progressing with a total of 30 companies investing in Africa, 16 of which are in Nigeria and 15 are in Ethiopia.

Both the 2019 IAID and 2018 IAF have provided strategic platforms that potentially increase economic cooperation between Indonesia and Africa, especially in infrastructure and other strategic sectors. Indeed, increasing economic cooperation with non-traditional markets including Africa has recently become one of the priorities in Indonesia's foreign policy.