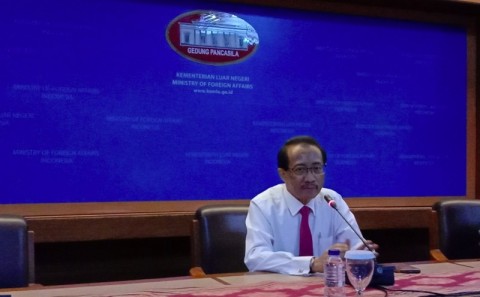 Indonesian Ambassador to Russia Wahid Supriyadi (Photo: Medcom.id/Marcheilla)
Jakarta: The annual Indonesian Festival will be held again in Moscow, Russia. Located in the Krasnaya Tresnya Park, this activity will be held in the summer, from July 31 to August 2, 2020.

According to the Indonesian Ambassador to Russia, Wahid Supriyadi, this activity will be carried out for the fifth time in the capital city of Moscow. This festival is an arena for micro, small and medium enterprises (MSMEs) to promote high quality local products to Russia.
BERITA TERKAIT

"This year's Moscow Indonesia Festival is the fifth time it’s been held, from July 31 to August 2 and will be preceded by a business forum," Ambassador Wahid told journalists in Jakarta on Thursday, January 16, 2020.

Wahid said that this activity will be part of the 70th anniversary of diplomatic relations between Indonesia and Russia. He targeted this year's festival to be attended by 135 thousand visitors.

Last year, the Indonesian Festival was attended by 117 thousand Russian visitors and business people. During the festival, the business forum resulted in a deal of USD 10.7 million.

This festival will be used as a place to bring together Indonesian and Russian business people. Russia's potential is quite large and must be explored much more.

"Russia is a country with a market of 147 million people. Russia is also home to 24 million Muslims," he explained.

For MSMEs who want to join this festival, they are requested to directly contact the Indonesian Embassy in Moscow. Later, the MSMEs that have registered will be selected.

The selection process is seen from the product and export potential of the MSMEs. Most MSMEs that have successfully passed the selection are engaged in fashion.

For large companies, there will be Indofood, Torabika, Kapal Api, and Archilles car tire manufacturers.