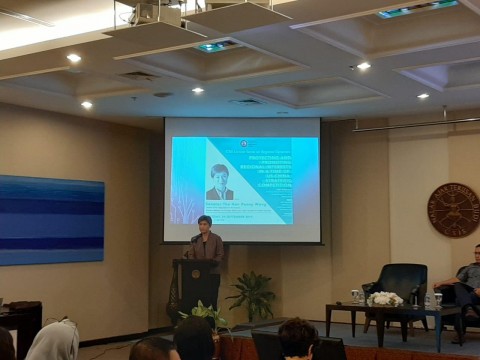 Her lecture focused on protection and promotion of regional interests in a time where the United States and China are strategic competitors.
BERITA TERKAIT

"In the international system we see erosion in support for international norms, rules and institutions. And power is shifting. The balance of economic and strategic power is changing. The two great powers, the US and China, are both – in different ways – choosing paths that challenge the status quo," Wong said.

"In the midst of this disruption, countries of our region must do more than simply navigate the slipstream. We must do what we can to shape the outcome we want. We must start with a focus on the sort of region we want – one where none of us is subject to the hegemony of another," she added.

For the reality of the current economic trend, she cited the Australian Government's Foreign Policy White Paper.

Regarding the region's economic engagement with China, she argued that regional economies will continue to rely on open trade and foreign investment.

"The size and nature of most regional economies means we will continue to rely on open trade and foreign investment," she said.

In order to explained China's place in the world, she showed how China is deeply enmeshed in the international system.

"Beijing is actively engaged in all the major international organisations – from the UN Security Council, to the IMF, WHO and Interpol. And its role is integral to the resolution of global issues and challenges – from climate change to nuclear disarmament," she said.

The fourth and final point in Wong's "Four realities" is the reality of power. She believes neither the US nor China will be able to exert undisputed primacy. Meaning, they must be prepared to live with each other.

"These are the realities that underlie the decisions of regional countries and must inform the interactions of both Beijing and Washington," she said.