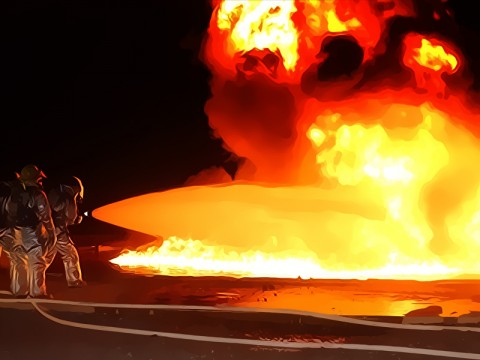 In the immediate aftermath of the blaze last night, WFP and its national NGO partner Resource Integration Centre (RIC) distributed fortified biscuits to 328 families (approximately 1,600 people) who had lost their homes or cooking equipment.
BERITA TERKAIT

After that, WFP distributed hot meals twice daily to all the families left with no means to cook until shelters and cooking equipment, including cooking gas, can be restored.

Families will then be reintegrated into WFP’s regular food assistance programme.

"We are deeply saddened to see the extent of the devastation in Camp 16," said Sheila Grudem, WFP’s Senior Emergency Coordinator and Head of Office in Cox’s Bazar, in a press release on Monday.

"Thanks to the partnerships we have with national organizations, UN agencies, retailers, and local restaurants, we fortunately have the capacity to provide immediate relief to those who have lost everything, and we have all our hands on deck to do so," Grudem added.

WFP’s regular food assistance in Cox’s Bazar provides every refugee family in the camps with an electronic voucher ("e-voucher"), topped up with a monthly allowance of US$12 per person per month.

Refugees can purchase their preferred foods directly from a network of 22 outlets in the camps managed by Bangladeshi retailers.

No WFP site was damaged by the fire, which will allow affected families to return to the outlets as soon as they have the means to cook.

Cox’s Bazar is the largest refugee settlement in the world, home to almost 900,000 refugees.

In a dense mesh of bamboo and tarpaulin shelters, fires are one of many hazards adding to the extreme vulnerability of refugees.