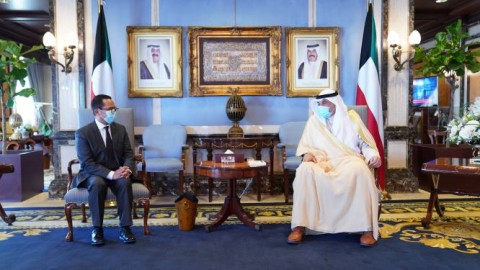 There are still many opportunities for cooperation between the two countries (Photo: KBRI Kuwait)

The meeting was a farewell call from the Indonesian Ambassador who will complete his term in Kuwait by the end of April 2021.
BERITA TERKAIT


The Prime Minister expressed his appreciation for the performance and achievements of the Indonesian Ambassador to improve bilateral relations between the two countries within his 2 year assignment period.

Ambassador Tri Tharyat expressed his gratitude and highest appreciation for the support of the Kuwaiti government during the assignment.

Several bilateral advances have been made after the holding of the first Joint Commission Session, especially those related to people-to-people contact.

The Indonesian Ambassador also conveyed the results of his meeting with Foreign Minister Sheikh Ahmad Nasser Al-Mohammad Al-Sabah regarding the 2nd Joint Commission Session in Indonesia which was delayed due to the covid-19 pandemic, and stated his commitment to realize the implementation in the second semester of this year.