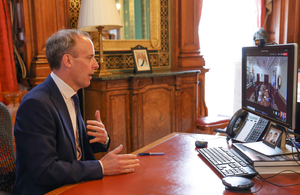 Both Ministers welcomed the Comprehensive Strategic Partnership between the UK and India, and discussed how they could coordinate efforts to deliver deeper cooperation and collaboration between the 2 countries.
BERITA TERKAIT


They noted the importance of working together to tackle global challenges such as climate change, coronavirus and countering shared threats including malign cyber activity.

The two ministers reflected on key achievements, such as the Enhanced Trade Partnership announced earlier this week, which removes market barriers and will help create new British and Indian jobs, including in strategic areas like science and technology.

"They discussed priority areas for further progress, across trade, defence and security, climate, and health," said the British Foreign, Commonwealth & Development Office (FCDO) in a press release on Thurday.

"They also welcomed the Migration and Mobility Partnership, announced this week, which will strengthen the 'living bridge' of people between the UK and India," FCDO stated.

On climate change both ministers agreed that it was important to build on the momentum growing among the international community ahead of COP26 in Glasgow.

They discussed regional issues including the UK’s successful application for ASEAN Dialogue Partner status, and how the 2 countries and ASEAN nations could work together to bring an end to the military coup in Myanmar.

Finally, they discussed the need for deeper collaboration to tackle the covid-19 pandemic and agreed on the need for swift and equitable access to vaccines around the world.