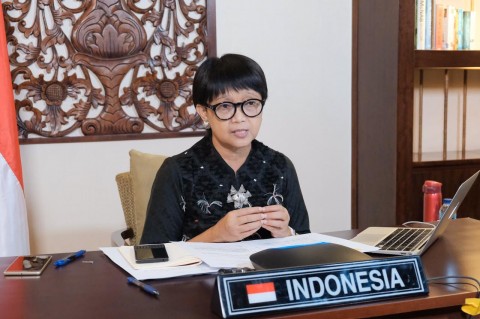 Jakarta: Indonesia initiated an Extraordinary Ministerial Meeting of the Non-Aligned Movement (NAM) Committee on Palestine and called on all NAM member states to pursue a durable solution for Palestine.

The Extraordinary Meeting of NAM Committee on Palestine was held virtually on Tuesday (June 22), according to a statement issued by the Ministry of Foreign Affairs and received here on Wednesday.
BERITA TERKAIT


During the meeting, Indonesian Minister of Foreign Affairs Retno Marsudi pointed out that Israel had routinely committed acts of violence.

"Such violations by Israel have become the new normal, the new reality, the new routine, and it will continue to be so if we are unable to find a durable solution to the root cause, the occupation," Marsudi remarked.

Speaking in connection with efforts to find a robust solution for Palestine, the Indonesian foreign minister urged NAM to take three crucial steps.

First, NAM must support the relaunching of credible multilateral negotiation.

"For a long time, no substantive peace talks have been held between Israel and Palestine," Marsudi stated.

The minister stressed that NAM’s support to revive the process of peace talks will be crucial, through existing multilateral platforms, with the support of countries in the region.

Marsudi believes this peace process should be based on a two-state solution in line with internationally agreed parameters.

Second, NAM must support the statehood of Palestine.

Marsudi highlighted that NAM’s strength laid in its numbers, due to which its voice for Palestine was of importance. She made an earnest appeal to NAM member states to speak in one voice to revive its commitment to supporting the statehood of Palestine.

"We should reiterate our call to NAM members and other countries that had yet to recognize the State of Palestine to do so," she remarked.

Third, NAM should be able to avert future recurrence of Israel's atrocities.

At the United Nations General Assembly (UNGA) Debate last May, Indonesia had called for the establishment of an international presence in Jerusalem to monitor and to ensure the safety of Palestinian people in the occupied territories and to protect the status of Al-Haram Al-Sharif (The Temple Mount) compound as corpus separatum, the holy site for three religions -- Judaism, Christianity, and Islam.

To this end, Marsudi echoed Indonesia’s expectations of NAM putting forth the same proposal.

"NAM member states, currently sitting in the (UN) Security Council, must become the driving force to push this initiative," she emphasized.

In her closing statement, the Indonesian foreign minister reiterated the objective behind the formation of NAM specifically aimed at bringing an end to imperialism and colonialism.

"We owe the Palestinian people a long overdue independent state of Palestine. Living side-by-side in equal footing with all of us. Our struggle is far from over, but by working together, one day, I believe Palestine will be free," Marsudi stated.

The Extraordinary Ministerial Meeting of the NAM Committee on Palestine resulted in a political declaration, which among others, contained a condemnation of the violation of the ceasefire by Israel, an affirmation that Israel's aggression and annexation of Palestine was a violation of international law, and encouragement to countries to recognize the status of Palestine as a state.