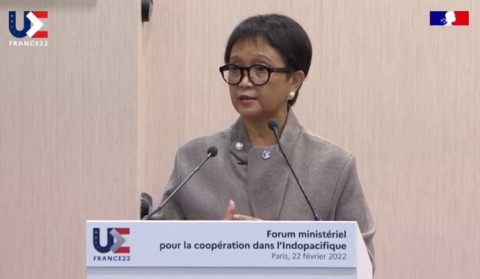 "Indonesia is fully aware of the growing significance of Indo-Pacific to world economy," Minister Retno said during the Ministerial Forum for Cooperation in the Indo-Pacific in Paris on Tuesday.
BERITA TERKAIT

For Indonesia, Minister Retno added, the Indo-Pacific is a sea of opportunities and it is too large for any single country to dominate.

"Therefore, common security, common stability and common prosperity in the Indo-Pacific region must be a public good," Minister Retno continued.

According to Indonesia' top diplomat, this can only be achieved through strategic collaboration.

"Now, let me share with you some thoughts to reach this objective. First, developing a positive paradigm. Competition in the Indo-Pacific is inevitable and even welcome. However, we must avoid such competition from becoming an open conflict. We must respect international law. Peace, stability, and predictability must remain centerpiece to our region. This is exactly the soul of the ASEAN Outlook on the Indo-Pacific. This is exactly the soul of Indonesia’s Presidency in the G20," Minister Retno explained.

"Second, promoting synergy among Indo-Pacific initiatives. Each of us here have different ways of looking at the Indo-Pacific. But this is also evidence of a converging interest among countries in promoting stability; and addressing the challenges faced by the region. For this reason, there is even more urgency to synergize the various initiatives. Apart from security issues, concrete cooperation must also be pursued on: maritime domain; sustainability and green transitions; trade and investment; connectivity and SDGs. This will deepen our partnership, build confidence, and in turn reduce security risk," Minister Retno concluded.