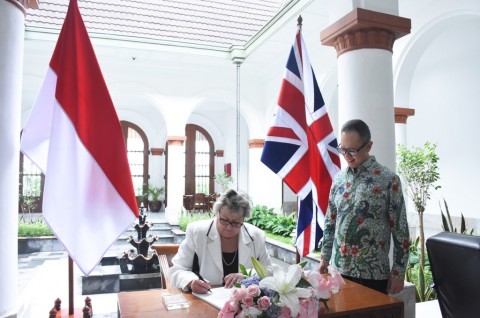 According to a written statement received by Medcom.id, the UK is one of Indonesia's potential economic partners in Europe.
BERITA TERKAIT

Mahendra said the two governments are committed to strengthening their cooperation in potential economic sectors such as trade, investment, creative economic, financial technology (fintech), education and maritime development. He explained that the UK is an important trade partner for Indonesia. He hopes that the UK can increase its investment in Indonesia.

Wheeler arrived in Indonesia on Monday, January 13, 2019. She will be present in Indonesia until Wednesday, January 15, 2019. Besides holding meetings with officials, she is also scheduled to open the UK Mission to ASEAN in Jakarta.

The UK has Embassies or High Commissions in all ten ASEAN capital cities. The opening of the mission aims to strengthen the country's engagement. It wants to play a part in strengthening multilateral collaboration in the region

This is Wheeler's first visit to Indonesia since her appointment as Minister for Asia and the Pacific in July last year.