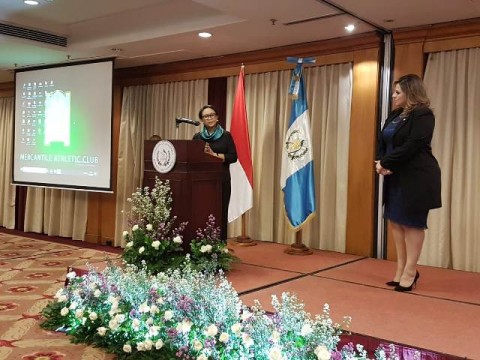 Guatemala is Indonesia’s second largest trading partner in the Central American region. (Photo:Medcom.id/Marcheilla Ariesta)
Jakarta: Guatemala has officially reopened its embassy in Jakarta. The embassy opening is expected to strengthen bilateral relations between the two countries.

"Our country is very interested to deepen relations and collaborations with you," the Guatemalan minister said here on Thursday evening.

Polanco and her delegation’s visit to Jakarta from December 10-11 2019 was the first Foreign Ministerial level visit since the opening of Indonesia-Guatemala’s bilateral relationship 26 years ago in 1992. The Guatemalan Embassy in Jakarta was closed in 1993 a year after the opening,

Guatemala is Indonesia’s second largest trading partner in the Central American region. The bilateral trade between the two countries reached USD50.29 million in 2018 and will be increased through various mechanisms, including Latin America and the Caribbean (INA-LAC) Business Forum and Trade Expo.

"We are building stronger infrastructure for our diplomatic relations. God willing, it will result in stronger economic ties," the Indonesian minister said.