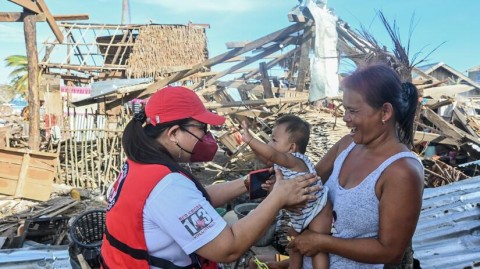 Philippine Red Cross is ramping up its shelter support. (Photo:Philippine Red Cross)
Manila: New assessments reveal the full extent of Super Typhoon Rai’s devastation when it slammed into the Philippines a little over a month ago, with the storm destroying or damaging a staggering 1.5 million houses, more than any other typhoon in recent decades.

Philippine Red Cross is ramping up its shelter support by transporting table saws, chainsaws and generators to areas hardest hit by the disaster, including Cebu, Bohol, Palawan, Siargao and Dinagat islands.
BERITA TERKAIT

The equipment is enabling Red Cross carpenters and trained volunteers to transform millions of fallen coconut trees into coco lumber to rebuild safer and stronger homes in the worst-affected areas.

Carpenters are training local people in safer house construction, to provide vital wages for families who lost their livelihoods, including the agricultural and fishing equipment they relied upon to earn an income.

"This is a much bigger disaster than the world realised a month ago. People who relied on farming, fishing and tourism can’t earn an income now. Millions of people don’t have a roof over their heads," Philippine Red Cross Chairman Richard Gordon said in a press release on Tuesday.

"Red Cross is supporting 30,000 families with roofing materials like corrugated iron sheets and tarpaulins to protect them from the sun and rain, but we need greater international support to meet the enormous need for safer and stronger homes for millions of people," Gordon stated.

According to him, the typhoon comes in the middle of a pandemic and a political campaign, which draw attention away from what truly is a catastrophe.

"Assessment data reveals that this Super Typhoon has caused enormous devastation, destroying or damaging more homes than any storm in recent decades," said.