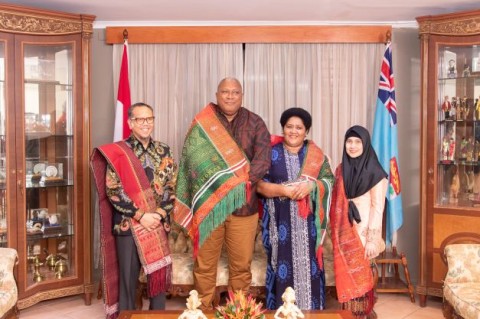 There are similarities between Fiji and Indonesia, which uphold diversity and the preservation of culture and local wisdom. (Photo: KBRI Suva)
Suva: In the spirit of commemorating the Birth of Pancasila in 2022, the Embassy of ndonesia in Suva held a cultural and diversity event with the theme "Celebrating Diversity: Pancasila the Way of Life of Indonesia" at the Residence of the Indonesian Ambassador to Fiji, on June 15.

The event was graced by the presence of the President of Fiji, Ratu Wiliame Katonivere and First Lady Filomena Katonivere.
BERITA TERKAIT

Ambassador R.M Benyamin Scott Carnadi introduced the noble values of Pancasila which is the foundation of Indonesia to the President of Fiji who was present accompanied by officials from the President's office and the Ministry of Foreign Affairs of Fiji.

This event was motivated by the spirit of commemorating the Birth of Pancasila which fell on June 1 as the philosophical basis of the Indonesian nation.

Since the independence of the Republic of Indonesia 77 years ago (17 August 1945), Pancasila has been tested and proven to be effective in uniting the Indonesian people, the people of a multicultural archipelago with various customs, ethnicities, local languages, cultures and religions that lies across the Indian Ocean to the Pacific Ocean, stretching 5,000 km along the equator.

Pancasila was coined by the first President of Indonesia, Ir. Sukarno, on June 1, 1945, a few months before Indonesian independence day, to become the basic principle of a nation and state in multi-diversity in the new state of Indonesia.

President Katonivere expressed his appreciation to Ambassador Carnadi and the whole staff members of the Indonesian Embassy in Suva for the hospitality and generosity.

Furthermore, he added that there are similarities between Fiji and Indonesia, which uphold diversity and the preservation of culture and local wisdom from generation to generation.

"There are similarities between our language and culture. Tonight, you have shown my wife and I, and the team that came here, of the beauty and importance of preserving culture and nurturing diversity, and that is something I stand for in Fiji," said President Katonivere in a press release on Friday.

When they arrived at Wisma Duta, the President of Fiji and the First Lady were wrapped with Ulos, woven cloth from North Sumatera, by Ambassador Carnadi and his wife as a form of warm welcome at Wisma Duta and also as a wrapping of blessings for the President and First Lady.

The evening was enlivened by various music and dance performances. The Pendet dance, and the combination of the Sajojo dance and the Meke dance from Fiji as well as music played from Angklung are performed by alumni of the Indonesian Arts and Culture Scholarship (BSBI) who are currently members of the Indonesian Scholarship Fiji Alumni (ISFA).