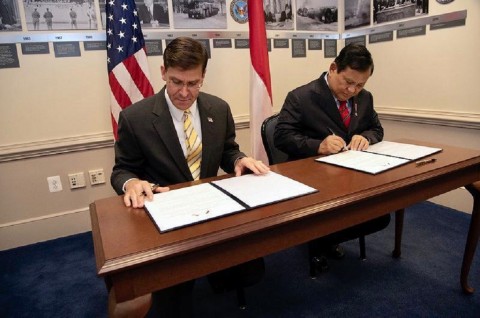 During the meeting, Secretary Esper communicated the importance of upholding human rights, the rule of law, and professionalization as the two countries expand their engagement.

Meanwhile, Minister Subianto expressed the importance of military engagement at all levels, and communicated his appreciation for the US’ support for Indonesia’s defense modernization.

"Both leaders shared their desire to enhance bilateral military-to-military activities and work together on maritime security," the US Department of Defense stated.

Secretary Esper and Minister Prabowo also signed a Memorandum of Intent to advance the Defense Prisoner of War/Missing in Action Accounting Agency’s efforts to re-start its work in Indonesia to recover the remains of U.S. personnel lost in Indonesia during World War II.

Both leaders also expressed sympathies to those affected by covid-19 in the two countries.