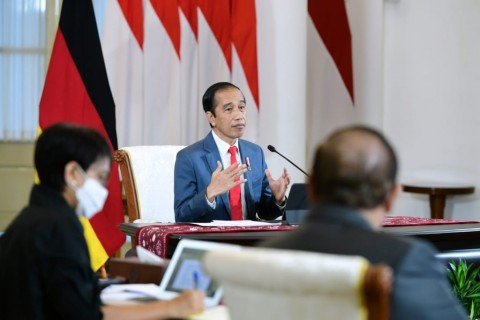 The virtual bilateral meeting was held a day after the opening of the Hannover Messe 2021 exhibition where Indonesia was named as a partner country.
BERITA TERKAIT


"It is an honor for Indonesia to be appointed as a partner country for the Hannover Fair 2021 and 2023," said President Jokowi.

During the virtual bilateral meeting, the two leaders discussed several bilateral issues, including cooperation in the fields of health, economy and environemnt.

"Indonesia has just issued the Job Creation Law which will be able to support investment cooperation," said the President.

"I invite Germany to develop a German industrial zone, the German Industrial Quarter, at the Batang Integrated Industrial Zone," said the President.