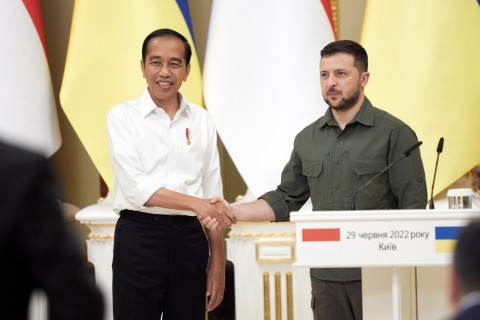 "You are now representing in Kyiv both the Group of Twenty, which Indonesia currently chairs, and one of the most powerful associations in the world, ASEAN, which your country will chair next year," Volodymyr Zelenskyy said in a joint statement to the media after the meeting.
BERITA TERKAIT

"Ukraine greatly appreciates the support of the Indonesian people and your personal support, Mr. President, in this time of war for freedom and independence of our state," Zelenskyy said.

Zelenskyy also thanked Jokowi for his unwavering support for the sovereignty, independence and territorial integrity of Ukraine.

"The facilitation of the chairman and member of the G20 is extremely important for the restoration of peace. I am grateful to you, Mr. President, for the personal invitation to take part in the G20 summit, and, of course, I accept the invitation," Zelenskyy stated.

Ukraine's participation will depend on the security situation in the country and on the composition of participants," Zelenskyy added.