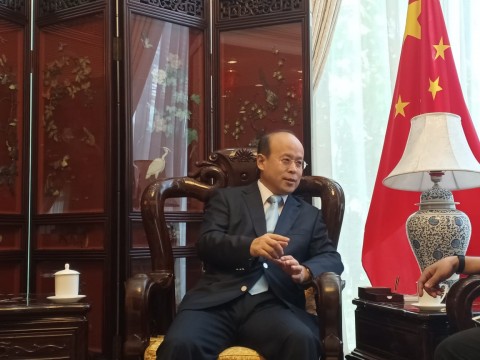 The Medcom.id team had an opportunity to interview Chinese Ambassador to Indonesia Xiao Qian on Friday. The Ambassador talked about bilateral relations between Indonesia and China, the current situation in Hong Kong, and the ongoing trade war between his country and the United States.
BERITA TERKAIT

Ambassador: The history of friendly exchanges between the two peoples can be traced back to more than 2,000 years ago. In recent years, under the strong leadership of President Xi and President Jokowi, our relationship has enjoyed solid and steady growth and stepped into a new stage featuring fast growth, frequent high-level exchanges, growing synergy between development strategies, fruitful results in practical cooperation, deepening people-to-people friendship and exchanges as well as close coordination on regional and global issues. We could say the relationship between our two countries is at its best in history.

Q: In your view, what are the best highlights in the relations between China and Indonesia?

Ambassador: Let’s take a look at the recent history of our relations. In 2013, during President Xi Jinping’s state visit to Indonesia, we further elevated our relationship to comprehensive strategic partnership. President Xi initiated the “21st Century Maritime Silk Road” for the first time, starting a new chapter in our bilateral ties. In March 2015, President Joko Widodo paid a state visit to China, further promoting our comprehensive strategic partnership. These are the memorable highlights in our bilateral relations, which opened a new chapter in our bilateral ties.

Q: Both China and Indonesia are active in international affairs. How does China anticipate the changes of global geopolitical situation these days?

Ambassador: Our world is undergoing profound changes unseen in a century. Peace and development remain the themes of our era. The surging trend toward multi-polarity, economic globalization, IT application and cultural diversity, accelerated transformation of the global governance system and international order. The rapid rise of emerging markets and developing countries led to greater balance in global power configuration. The well-being of people in all countries has never been so closely intertwined as it is today.

We also face challenges unseen before. Hegemony and power politics persist. Protectionism and unilateralism are mounting; war, conflicts, terrorism, famine and epidemics continue to plague us. Security challenges, both traditional and non-traditional, remain as complex and interwoven as ever.

Both China and Indonesia are developing countries and emerging economies. We have to jointly work with other countries, stick to a global governance concept in the spirit of extensive consultation, joint contribution and shared benefits, maintain the international system with the United Nations (UN) at the core and the international law as the basis, safeguard the rules-based multilateral trading system with the World Trade Organization (WTO) at the core, jointly promote multilateralism and free trade, promote democracy in international relations, and build an open world economy.

Q: Belt and Road Initiative (BRI) is the highlight for China and Indonesia relations, could you describe what can the two countries get from BRI?

Ambassador: In recent years, our two countries have actively promoted synergy between China’s BRI and Indonesia’s Global Maritime Fulcrum Vision. We have deepened connectivity in policy, infrastructure, trade, finance and people-to-people ties, which has brought real benefits to our two peoples.

On the one side, synergizing our respective development strategies has brought high-quality Indonesian products to Chinese consumers, outstanding Indonesian students to Chinese colleges and universities, as well as reliable partners and broader prospects for Chinese businesses. Plus, Chinese tourists can enjoy a beautiful Indonesia. Overall, synergizing our respective development strategies has created favorable conditions for China’s development and brought many development opportunities for Indonesia as well.

On the other side, the Jakarta-Bandung High-speed Rail and Regional Comprehensive Economic Corridors help to promote balanced development of different regions in Indonesia. China’s investment will help to ease Indonesia’s financial burden in terms of infrastructure building, human resource development, and social welfare projects,as well as create new jobs.

By expanding the current swap agreement between the two countries, Indonesia will enjoy better resilience against financial risks and maintain a stable currency. We also expanded Indonesia’s export to China. Science and technology cooperation will also help with Indonesia’s human resource development.

Q: What do China want from Indonesia so the BRI can be realized?

Ambassador: In Indonesia, our two countries are working together to building the BRI and Global Maritime Fulcrum Vision, synergizing development strategies, it is not only BRI, but also Global Maritime Fulcrum Vision. We wish Indonesia, under the strong leadership of President Joko Widodo, would maintain political stability, rapid economic growth, overall social harmony, and continuous improvement of people’s livehood, so that our efforts to synergize development strategies could enjoy a solid basis, make steady progress and deliver more benefits to our two peoples.

Q.Can you describe what is really happening in Hong Kong?

Ambassador: Starting from June this year, several massive assemblies against the amendments of the Fugitive Offenders Ordinance and the Mutual Legal Assistance in Criminal Matters Ordinance has taken place in Hong Kong. In order to solicit broader public opinions and to restore calm as early as possible, the Hong Kong SAR government completely halted the amendments of two ordinances concerning the transfer of fugitive offenders.

These above-mentioned activities are not peaceful assembly, demonstrations or protests, and constitute serious violence crimes, which trample the rule of law, sabotage social order, seriously affect the safety of Hong Kong citizens, seriously undermine Hong Kong’s prosperity and stability as well as the "one country, two systems" principle.

Q:The trigger for this protest is the extradition law proposal, what makes the China Government proposes the law?

In February 2018, Chen Tongjia, a Hong Kong resident, was suspected of murdering his pregnant girlfriend in Taiwan before he fled back to Hong Kong. Hong Kong had no jurisdiction over this case. In order to transfer Chen Tongjia to Taiwan for trial, the Hong Kong SAR government proposed the amendments to the above-mentioned ordinances. So far Hong Kong hasn’t signed any deals with China’s mainland, Macao or Taiwan on the transfer of fugitives and mutual legal assistance in criminal matters.

By amending the ordinances, the SAR government hopes to cooperate with China’s mainland, Macao and Taiwan in transferring criminal suspects and fugitives through special arrangements, which will help to deal with individual cases and plug the loopholes in the legal system, and enable Hong Kong to work better with other parts of China to jointly combat crimes and uphold rule of law and justice.

Q: The protester want wider space of democracy, how are the Government of China’s views about that demand?

Ambassador: In the current chaos, some of the violent radicals stood in the foreground. Entrapped in the middle are some of the well-informed citizens who have been partially misled. And behind the scenes are anti-China forces in the West and local anti-China forces who intend to mess up Hong Kong. The evil manipulators behind this political storm are the hostile forces against China's development. Their fundamental purpose is to turn Hong Kong into a battleground for global rivalry, a forefront for acting against the central government, and a pawn to contain the development of China. Democracy is only the guise for the anti-China forces who intend to mess up Hong Kong.

Q: What are the China Government efforts to keep Hong Kong in two different systems?

As it is outlined by President Xi Jinping, to better implement the policy of "One Country, Two Systems" in Hong Kong, it is imperative to have a correct understanding of the relationship between "One Country" and "Two Systems",to always act in accordance with the Constitution and the Basic Law, to always focus on development as the top priority, to always maintain a harmonious and stable social environment.

Q: Will the Government of China continue a crackdown toward the protesters?

Ambassador: Currently, those so called protesters’ acts have completely go against normal assembly and demonstration. The radical violators in Hong Kong have completely breached the bottom line of law, morality and humanity. Their flagrant acts of serious violent crimes in public are shocking and chilling. We firmly support the Hong Kong police force and the judiciary in carrying out resolute and strict justice and bringing criminals to justice as soon as possible, which also helps to maintain a sound working and living environment for more than 160,000 Indonesian citizens in Hong Kong.

Q: If the protest still happens in a long period of time, what would the government eventually do?

Ambassador: We sincerely believe that, under the solid support of the Central Government, with the strong support of all Chinese people, including Hong Kong residents, the HKSAR government and Hong Kong police are fully able to combat against violence crimes in accordance with the law, recover social order and stability.

Q: Is there any chance that democracy applied without limitation in Hong Kong? As the people of Hong Kong think that there are limitations from the Chinese Government?

Ambassador: As we all know, democracy’s default is tyranny of the majority. Most countries balance democratic system with their Constitution, so that the democratic system will not infringe and abuse the basic rights and freedom of its people, especially the minorities. There is no a single place where democracy is without limitation. Ever since the return of Hong Kong to China, Hong Kong citizens enjoy democratic rights and freedom they have never enjoyed before.

Q: How do you see the China-US trade war? How will China deal with it?

Ambassador: The US unilaterally provoked trade friction, brazenly preached unilateralism, protectionism and economic hegemony, goes against the consensus of China-US leaders, and disobeys the WTO rules.

It not only undermines China’s interest, but also seriously damages the multilateral trading system and normal international economic order. It will bring recession to the world, which will also hurt the US at the end. As pointed out in a IMF report issued this July, if the US further escalates the trade friction with China, it would decrease the world GDP growth by 0.5%, which amounts to 450 billion US dollars.

Ever since the kick-off of the China-US economic and trade consultations in February 2018, the US has backtracked on its commitments in the China-US economic and trade consultations once and again. The first US backtracking was in May 2018. It breaches a consensus of“not to fight a trade war”written in a China-US joint statement. The second US backtracking was in May 2019. It breaches the consensus “to halt new additional tariffs” reached by two presidents on the margins of the G20 Summit in Argentina. The third backtracking was in August 2019, when the US breaches the consensus that “will not impose new tariffs on Chinese exports” reached between the two presidents in Osaka, Japan.

China does not want a trade war, but it is not afraid of one. China will not compromise on major issues of principle. We hope the US does not misjudge the situation, stop wrong doings, and find a solution to the friction acceptable to both sides through consultation, on the basis of mutual respect and equality.

I have to stress that, China’s necessary counter measures,in its essence, is maintaining multilateralism and free trade, it serves the common interests of the International community. China will firmly deepen its reform and opening up. China’s great domestic market will keep open to the outside world, which will bring more opportunities to countries around the world.

China is looking forward to strengthen coordination and communication with all parties, continue to fight against US trade bullyism, firmly maintain the multilateral trading system with the WTO at the core, and jointly build an open world economy.