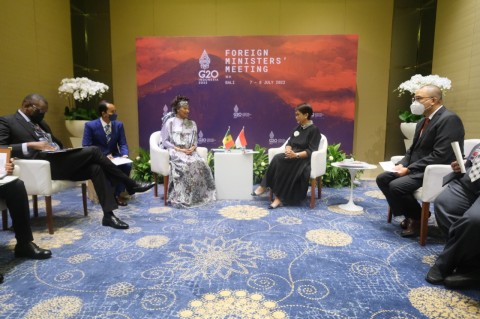 The Senegalese foreign minister is in Bali to attend the G20 Foreign Ministers Meeting, July 7-8 2022, in her capacity as the Chair of the African Union.
BERITA TERKAIT

The Foreign Minister of Senegal expressed his appreciation for Indonesia as the first G20 President to invite the African Union to attend the G20 meeting.

The two foreign ministers have also agreed on a visa-free regime for service diplomatic passport holders.

On this occasion, Indonesia has also submitted a request to be excluded from the Senegal Visa System C classification.

The policy is considered very inappropriate with the conditions of Indonesia.

The Minister of Foreign Affairs of Senegal agreed that the Senegalese visa policy towards Indonesia was not in accordance with the Indonesian situation and therefore will immediately coordinate with the authorities in Senegal so that the policy can be reviewed.

Apart from bilateral issues, the current situation in Ukraine has also been discussed.

The two foreign ministers shared the same view on the importance of uniting the voices of developing countries in an effort to stop the war.