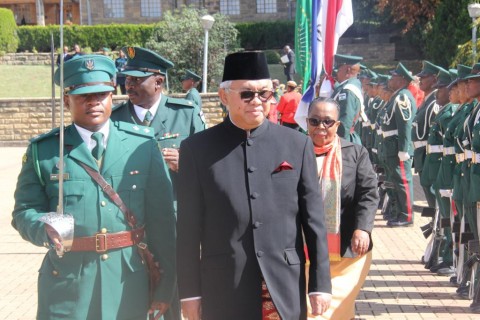 The ceremony began with the presentation of the letter of credentials from the President of the Republic of Indonesia to the King of Lesotho, and then followed by military procession.

The Indonesian Ambassador had the opportunity to inspect the military forces of the Kingdom of Lesotho who dressed in colorful and lively uniforms.

"The said military reception was held at the main park of the Royal Palace, continued by hearing to the national anthems of the two countries, played by the army band," the Foreign Ministry said in a press statement released on Friday.

During his speech, the Indonesian Ambassador conveyed potentials of cooperation that had not been explored, in which he committed to continue to working on during his tenure.

The Ambassador invites the presence of the Government of Lesotho and its business sectors to participate in the Indonesia-Africa Infrastructure Dialogue (IAID) which will be held in August 2019.

IAID will be served as the follow-up to the Indonesia-Africa Forum (IAF) which was successfully held in 2018.

In his remarks, His Majesty King Letsie III appreciated the Asian-African spirit which always underlies the good relations between the two countries.

After the presentation of the Letter of Credentials, the King of Lesotho was pleased to have a tete-a-tete meeting with Ambassador Salman Al Farisi, in which His Majesty reiterated the importance of the two countries to enhance cooperation in various sectors.

On the sidelines of his official visit, Ambassador Salman Al Farisi also had the opportunity to have meetings with high ranking officials of the Kingdom of Lesotho, including Deputy Prime Minister and Deputy Minister of Foreign Affairs and International Cooperation.

The Indonesian Ambassador in his statement to high ranking Lesotho officials, expressed his expectations to further enhance cooperation in strategic industrial sectors such as infrastructure, weaponry, textiles and digital economy.

The Indonesian Ambassador also underlined the Indonesian active role as a non-permanent member of the UN Security Council which continues to mainstream the African agenda inside the institution.

The Deputy PM also acknowledged Indonesia's role in the UN Peacekeeping Operation Forces, and put Indonesia as one of the role model in Lesotho's efforts to participate in similar programs in Africa.

Meanwhile, the Deputy Minister of Foreign Affairs and International Cooperation, Halebonoe Sets'abi, assured that his team would fully support the work of the Indonesian Ambassador in Pretoria in an effort to escalate the cooperation between the two countries.

"This is including his welcoming gesture toward the proposal to start the discussion on the visa-waiver agreement for diplomatic and service passport holders," the Foreign Ministry noted.

Lesotho is a landlocked country in the southern part of the Republic of South Africa. Diplomatic relations between Indonesia and Lesotho have been established since 1993. Ambassador Salman Al Farisi who arrived in Pretoria, South Africa, on June 9, 2018, is the seventh Indonesian Ambassador in Pretoria.