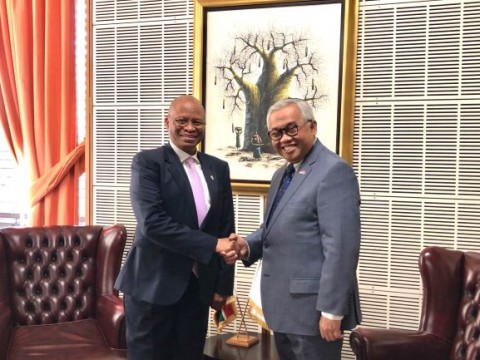 South Africa has developed rapidly and are far better compared to the Apartheid era. (Photo:KBRI Pretoria)
Jakarta: South Africa's Chief Justice Mogoeng Mogoeng welcomed Indonesia's offer to strengthen the bilateral relations between the countries by increasing cooperation in the field of law which could be carried out through various technical cooperations and sharing of experiences.

The meeting was used by Ambassador Al Farisi to convey invitation from Indoneian Constitution Court Chief Justice Anwar Usman to Chief Justice Mogoeng to attend the 1st International Expert Meeting that will be held in Jakarta on 20 – 22 September 2019.

"This invitation is also a good opportunity for South Africa to work together with Indonesia in the field of law," the Indonesian Embassy in South Africa said in a press statement released on Friday.

Chief Justice Mogoeng emphasized further that the conditions in South Africa has developed rapidly and are far better compared to the Apartheid era. This positive development has raised hopes among South Africans to achieve much better life.

However, this may not be able to be achieved unless South Africa has a credible legal system. It is for this reason that Chief Justice Mogoeng has requested all South Africans to come forward and to report any corruption cases committed by law enforcement officials.

Ambassador Salman Al Farisi echoed Chief Justice views by stressing that law enforcement is one of the challenges in upholding democracy. Furthermore, Ambassador Al Farisi pointed out that Indonesia is currently in the process of improving the integrity of the legal system, one of which is by combating corruption.