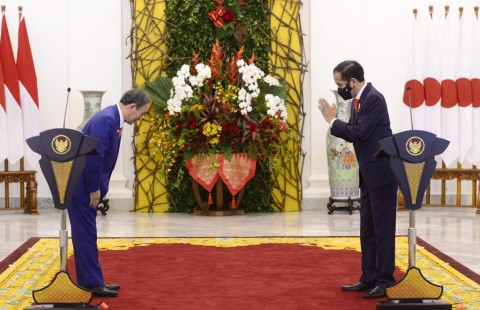 "This (visit) also reflects a shared commitment to continue to strengthen the strategic partnership between Japan and Indonesia," said the Indonesian president during a joint press statement after the bilateral meeting.
BERITA TERKAIT

During the bilateral meeting, the two leaders discussed a wide range of issues, including health and economic cooperation.

President Jokowi welcomed the health cooperation memorandum between Indonesia and Japan which was signed on October 19. He also appreciated Japan's commitment to support the formation of the ASEAN Covid-19 Response Fund.

"I also invited Japan to strengthen health governance in the region to deal with future pandemics, including the establishment of the ASEAN Center for Public Health Emergency and Emerging Diseases," President Jokowi stated.

Moreover, the two leaders also agreed on the importance of establishing a Travel Corridor Arrangement (TCA) for essential businesses.

"We also agreed to order the Japanese and Indonesian foreign ministers to negotiate the details and finish them within one month," President Jokowi stated.

According to President Jokowi, Japan is one of Indonesia's strategic partners in the economic sector. President Jokowi welcomed the relocation and expansion of investment from Japanese companies to Indonesia, such as Denso, Sagami, Panasonic, Mitsubishi Chemical, and Toyota. He also encouraged Japan to participate in Indonesia's Sovereign Wealth Fund.

Lastly, the two leaders discussed the Indonesia-Japan partnership in strengthening multilateral cooperation. In this regard, President Jokowi went on to say that the spirit of cooperation must continue to be strengthened, especially in the midst of increasingly sharp rivalries between major world powers. He added that the spirit of inclusive cooperation also needs to be promoted, as reflected in the ASEAN Outlook on the Indo-Pacific," he said.

“I underline my hope that the South China Sea can continue to be a peaceful and stable Sea. This can happen if all countries respect international law, especially UNCLOS 1982, " President Jokowi said.

Meanwhile, Prime Minister Suga admitted that Indonesia is an important country in ASEAN. He said that he is committed to continuing to work with Indonesia.

"Japan will cooperate with Indonesia for regional peace and prosperity, based on the strategic partnership of our two countries, which is strengthened by my visit to Indonesia this time," said the Japanese prime minister.