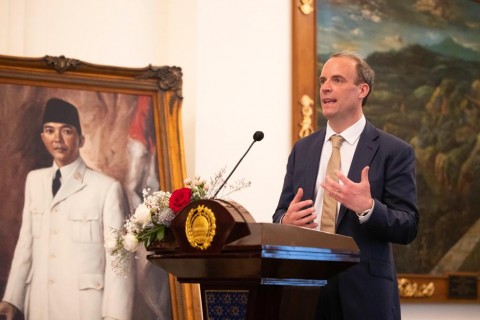 
"This is my fourth visit to the region; to two key strategic partners, because the Indo-Pacific tilt is vital for the UK to grasp the economic opportunities and rise to the new challenges ahead," said Raab in a press release on Wednesday.

In Brunei’s capital, Bandar Seri Begawan, Raab will have an audience with His Majesty the Sultan of Brunei before meeting Foreign Minister II Dato Erywan, where trade will be on the agenda given Brunei’s membership of the CPTPP (Comprehensive and Progressive Agreement for Trans-Pacific Partnership), which the UK hopes to accede to.

He will then join the second UK-ASEAN ministerial dialogue, to explore Dialogue Partner status for the UK, before returning to the UK.

He also met Health Minister Budi Sadikin where they discussed the importance of international collaboration in pandemic preparedness.

In his final meeting in Jakarta, Raab spoke to ASEAN Secretary-General Lim Jock Hoi as the UK looks to progress closer ties with the key regional bloc.