Indonesia Encourages US to Invest in Natuna Islands 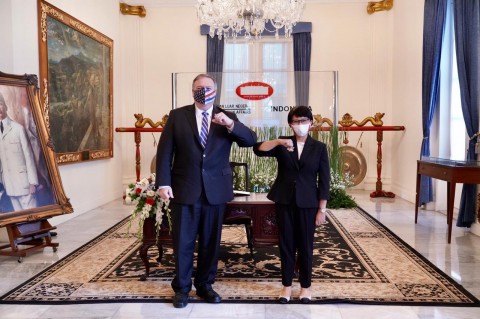 "It is always an honor for me to have you back in Indonesia after your last visit two years ago.  We value your visit amidst this challenging time of pandemic.  It reflects your strong commitment to enhance bilateral relation with Indonesia," said the Indonesian foreign minister during a joint press statement after the bilateral meeting.
BERITA TERKAIT

According to Indonesia's top diplomat, The US is a strategic partner for Indonesia. The Indonesia-US partnership is based on many shared values such as democracy, human rights, promoting tolerance and diversity, and respect for rules of law.

"It is a partnership between equals, this our mutual respect and mutual benefit," she stated.

On bilateral side, the two leaders agreed to enhance the Indonesia-US strategic partnership by amplifying shared values and interests while respecting differences. They also agreed to promote cooperation on health sector.

Moreover, they also agreed to strengthen economic cooperation, particularly to strengthen global supply chain and expedite economic recovery. The Indonesian foreign minister underlined the importance of GSP facilities that not only bring benefits for Indonesia but also for US businesses and encouraged US businesses to invest more in Indonesia, including for projects in the outer islands of Indonesia, such as in Natuna Islands.

"We agreed that the two nations with economies the scale of ours, the size of ours should be doing much more trade together.  There should be much more investment here from the United States, especially in the digital, energy, and infrastructure sectors.  I’ll do my best to help deliver that.  A few weeks back now, the head of our Development Finance Corporation was in conversations, too.  We are poised to use that American tool to promote private sector investment that can support President Widodo’s plans to spend $327 billion on more than 250 infrastructure projects," Pompeo stated.

On the regional aspect, they were committed to promote the Indo-Pacific cooperation that is open, inclusive, transparent, and rules-based.  They also discussed the situation in the South China Sea.

"Our law-abiding nations reject the unlawful claims made by the Chinese Communist Party in the South China Sea, as is clear from Indonesia’s courageous leadership on the subject within ASEAN and at the United Nations. It’s a cause worth pursuing in multilateral settings, and the Trump administration very much supports this.  We also welcome the example Indonesia has set with decisive action to safeguard its maritime sovereignty around the Natuna Islands. Pompeo stated.