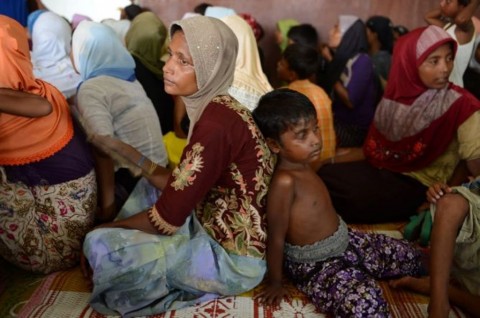 Rohingya Refugees (Photo: AFP)
medcom.id, Jakarta: The handling of refugees flooding into Asian countries is taken into consideration by Indonesia. Indonesia is making an effort to strengthen the partnership in refugee management by resolving the roots of the problems.
The Directorate General of Multilateral of the Foreign Ministry is holding the Jakarta Declaration Roundtable Meeting on Addressing the Root Causes of Irregular Movement of Persons at Mandarin Oriental Hotel, Jakarta, November 27-28, 2015. The conference is a follow up of the Special Conference on Addressing Irregular Movement of Persons on August 2013 in Jakarta.
The meeting was followed by state officials and representatives of international organizations, from the 13 countries hit directly by the overflowing current of refugees.
The nations present among others are Afghanistan, Australia, Bangladesh, Iran, Cambodia, Malaysia, Myanmar, Pakistan, Papua New Guinea, the Philippines, New Zealand, Sri Lanka and Thailand. Meanwhile, the four organization present are IOM, UNHCR, UNODC and UNDP, as well as Bali Procces Regional Support Office (RSO).
"The Roundtable Meeting is an active form of Indonesia in its effort to resolve the irregular movement of persons in the region, especially on the prevention. Through the meeting, it is hoped that the participants may exchange ideas and discuss the root causes," mentioned the Director General of Multilateral of the Ministry of Foreign Affairs, Hasan Kleib, in Mandarin Oriental Hotel, Jakarta, Friday (11/27/2015).
"Identification of the problem include the trends and challenges of root causes, explorations on the efforts within the mainframe of regional cooperation and future partnerships between the countries hit by the effect of irregular movement of people and other stakeholders," he continued.
Hasan added that the meeting is aligned with Indonesia's condition as a nation directly hit by the refugee flow. Indonesia is also consistent in promoting comprehensive and balanced partnerships in refugee management.
"Indonesia is supporting cooperation on the sectors of prevention, early detection, action and protection of the victims," mentioned Hasan Kleib.
Aside from that, Indonesia sees the issue of refugee migration as a transnational problem to be resolved together with the countries hit with the effect, based on the principles of sharing burden and responsibilities between the home, transit and destination countries.
(WAH)