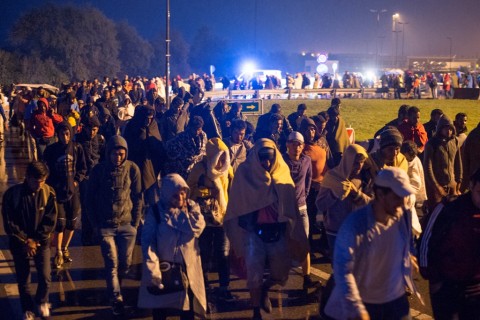 Syrian refugees try cross to Germany (Photo: AFP)
medcom.id, Jakarta: Currently, at around 400,000 immigrants from Syria is in Germany. However, the German Human Rights and Humanity Commissioner, Christoph Straesser assessed that Europe is not in unison to handle the issue.

Straesser mentioned that his country is to receive 800,000 more refugees. "We are unable to help all people in the country, so we have to find the right solutions, one of them by accepting their presence in Europe," said Straesser to the press at the German Embassy in Jakarta, Monday (9/21/2015).

"It is not only about a place to live, but also medical, education for children and their welfare," he continued.

The current problem being faced is the disagreement of European Union nations in receiving the immigrants. It is the opposite of the function of the union itself.

Indonesia itself has been housing at around 13,000 migrants. It is according to what the United Nations has conveyed, that helping each other in times of needs is a must.

Indonesia currently has not signed the refugee convention, meaning the country is not entitled to house the incoming flow of refugees.

"European Union President advised us to receive 160,000 immigrants with a certain quota to be distributed to each country. But this has not yet been agreed on," added Straesser.

"We want the immigrants to be listed where they are taking refuge, as provided with educational and welfare facilities. However, Germany will not be able to tackle this matter on its own," he mentioned.(FJR)