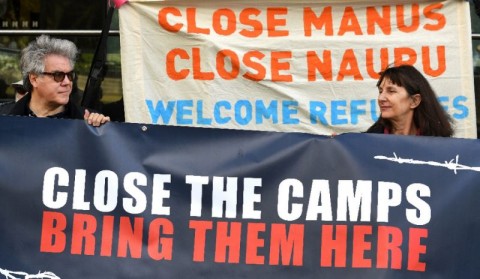 Canberra sends asylum seekers who try to reach Australia by boat to facilities on Nauru in the Pacific and Papua New Guinea's Manus Island, where they are blocked from resettlement in Australia (Photo: AFP/William West)

Canberra sends asylum seekers who try to reach Australia by boat to facilities on Nauru in the Pacific and Papua New Guinea's Manus Island, where they are blocked from resettlement in Australia.
BERITA TERKAIT


But conditions in the camps have been widely criticised by doctors and refugee advocates, who say some asylum seekers have suffered mental health problems due to their prolonged detention.

A deal was struck in June to avoid a trial, more than three years after lawyers mounted the class action against the government and two service providers operating at Manus.

The compensation package was approved by Victoria's Supreme Court on Wednesday. Nauru was not involved in the legal case.

"I am satisfied that the settlement is fair and reasonable as between the parties," Justice Cameron Macaulay told the court.

The Manus centre is due to shut next month after a PNG Supreme Court ruling last year declared that holding people there was unconstitutional.

Lawyers for the group participating in the settlement said they hoped to get the compensation to them before the closure.

"The response rate we have had so far has been very good. The sign-up rate speaks for itself. People have voted with their feet here," Rory Walsh of law firm Slater and Gordon told reporters in Melbourne.

"The group is engaging with us and they are keen to get this approved and to get some compensation to them so they can get some certainty given the significant uncertainty that lies ahead for this group at large," Walsh added.

But one detainee, Iranian refugee Amir Taghinia, said he had opted out of the agreement and that it would not help him leave Manus Island.

"Getting that money is not the issue," he told the Australian Broadcasting Corporation Wednesday.

The government, which had no immediate comment, has said it will move the asylum seekers and refugees from the Manus camp by October when it closes.

Some will be relocated to third countries, or resettled elsewhere in PNG. (AFP)