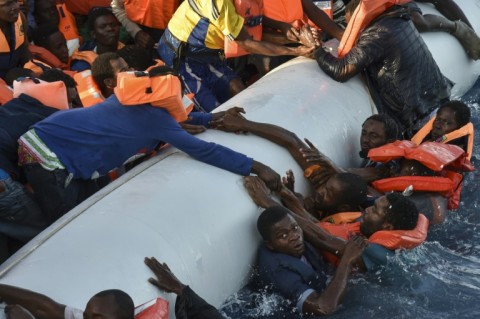 Thousands of migrants, many of them from sub-Saharan Africa, have died trying to get to Europe. (Photo:AFP/Andreas Solaro)

medcom.id, Geneva: More than 100,000 migrants have made the perilous Mediterranean crossing to Europe this year, the UN said Tuesday, amid mounting tensions among EU nations on how to tackle the crisis.


Italy has taken in nearly 85 percent of the arrivals, most of them sub-Saharan Africans crossing from Libya, and has pleaded for help from other European Union nations, saying it is struggling to cope.

"The reception of rescued migrants cannot be seen as an issue only for Italy, but a matter for Europe as a whole," IOM chief William Lacy Swing said, appealing for the rest of the EU to show more solidarity.

On Sunday, Italian Interior Minister Marco Minniti called on EU neighbours to open their ports to rescue ships picking up migrants in the Mediterranean, after issuing a drastic threat to close its own ports to the boats.

But France rejected that idea, with an aide to Minniti's counterpart Gerard Collomb telling AFP this would only encourage more migrants to set sail.

EU interior ministers are due to meet in Estonia's capital Tallinn on Thursday to discuss the migrant crisis, the continent's worst since World War II, in a bid to defuse a long-running row over spreading asylum seekers across the bloc.

The EU put in place a policy in 2015 to distribute around 160,000 asylum-seekers across different countries.

But only about 20,000 have been relocated from Italy and Greece under the scheme, while Hungary, Poland and the Czech Republic have flatly refused to take part.

Ministers meeting in Tallinn will also discuss proposals for a "code of conduct" for charities operating rescue boats in the Mediterranean, a plan announced by France, Germany and Italy on Monday.

Separately, foreign ministers from European and African countries affected by the crisis will meet in Rome on Thursday with representatives of the EU and UN as part of a diplomatic push to stem the influx.

In an interview with France's Figaro newspaper, European migration commissioner Dimitris Avramopoulos called on Tuesday for EU countries to speed up deportations of failed asylum seekers to ease the pressure, but warned this needed cooperation from their home countries.

The UN figures released Tuesday showed that between January 1 and July 3, more than 85,000 migrants landed in Italy, nearly 9,300 arrived in Greece, nearly 6,500 in Spain and over 270 in Cyprus.

"We are under enormous pressure," Italy's Minniti said in an interview with Il Messaggero over the weekend, while the country's Red Cross warned that the situation in overcrowded reception centres was becoming critical.

The UN's refugee agency also weighed in, warning that Italy cannot continue absorbing tens of thousands of migrants on its own.

"This is not sustainable. We need to have other countries joining Italy and sharing that responsibility," said Vincent Cochetel, UNHCR special envoy for the central Mediterranean.

Austrian Defence Minister Hans Peter Doskozil warned Monday that Vienna is set to impose border checks and deploy soldiers on its frontier with Italy if the Mediterranean influx does not slow.

While the numbers arriving in 2017 are staggering, they remain far below last year's figures.

But at that time most of the migrants were crossing from Turkey to Greece, and an EU deal with Ankara in March last year effectively hit the brakes on that movement.  (AFP)