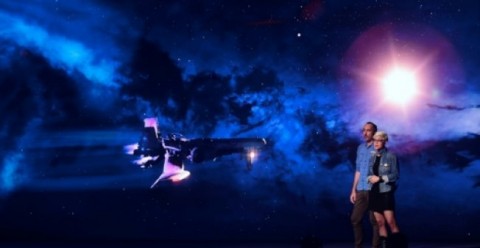 Guillame Bruner, senior producer (L) and Gabrielle Schrager, narrative director from Ubisoft Montpellier introduce new games to the audience at the Ubisoft E3 2018 media briefing ahead of the Electronic Entertainment Expo. (Photo:AFP/Frederic J Brown)
Los Angeles: Bandits, soldiers, demons, zombies, aliens and other enemies will be shot, stabbed, bludgeoned, incinerated, or even blow up on the show floor of the Electronic Entertainment Expo opening here Tuesday.

Deadly conflicts played out with stunning arsenals in creative fictional settings remain at the heart of blockbuster action video games, with imagery getting richer and fight mechanics smoother due to improving technology.
BERITA TERKAIT

There was no shortage of bloody battle in games spotlighted at media events hosted by video game industry titans in the days leading up to E3 showcase.
And a hot video game trend now is "Battle Royale" death-match games such as "Fortnite" and "PlayerUnknown's Battlegrounds" in which players vie against one another to be the sole survivor.

Shooting and swordplay have long been staples in a global video game industry that the Entertainment Software Association said took in a total of $116 billion worldwide last year.

Violence in games has the trade group working to make sure politicians including US President Donald Trump understand that there is no link between that kind of play and what people do in the real world, ESA chief executive Michael Gallagher told AFP on Monday.

Trump and the ESA met earlier this year after a slaughter at a US high school.

Some blamed violence in media such as video games, not access to guns, for such shootings.

"One thing that has sunk in to a great degree is the truth that video game violence has nothing to do with real-world violence," Gallagher said of meetings with politicians on federal and state levels.

"There are 2.6 billion gamers around the world, yet these outbreaks are uniquely American. It has got to be something else."

A growing number of policy numbers are "rejecting the notion outright" that video games cause people to commit actual violence, according to Gallagher.

"The tide has turned significantly," he added.

In the US, 22 states offer video game companies economic incentives to set up shops and create jobs, according to Gallagher.

Some 45,000 industry members are expected to attend E3, along with 15,000 gamers who bought tickets to get access to the show floor and its more than 200 exhibitors, the ESA said. (AFP)