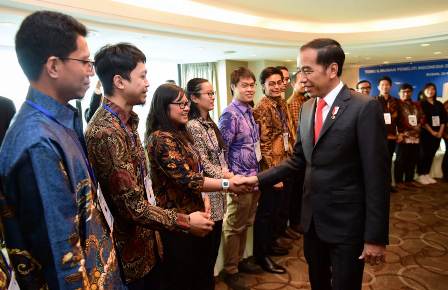 President Joko Widodo (Photo: Palace Press Bureau)
Jakarta: The government has begun to organize the development of research and innovation. Indonesia must be able to export finished goods to other countries, not only raw materials.

"Indeed, we begin to organize our research and innovation," President Joko “Jokowi” Widodo said when meeting with Indonesian researchers and scientists at the Lotte Hotel, Busan, South Korea on Monday, November 25, 2019.
BERITA TERKAIT

Jokowi explained that Indonesia had begun to transform. In the energy sector, the government will start to introduce B30 biodiesel fuel.

"I think our country has many goods that can be changed from  exported raw goods, into finished or semi-finished goods," he said.

According to him, it is part of the country's business strategy, so that exported goods have added value. He is optimistic that this can be done well.

"A lot of the budget for infrastructure will begin to shift to research and innovation," he explained.

In 2045, Indonesia is predicted to become the fourth largest economy with per capita income reaching USD23,000-29,000 per year.