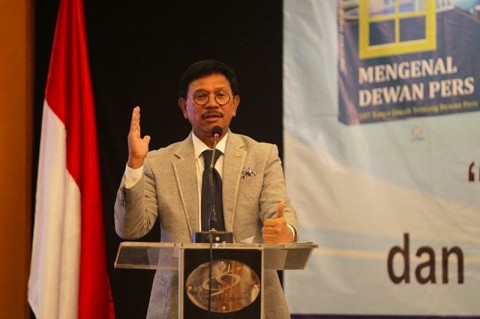 "Like it or not, we are all currently in the era of digitization that must be faced in order to compete with other nations of the world," Johnny said when delivering a speech commemorating the 61st Anniversary of NTT in Wurukambera, East Sumba on Saturday, December 21  2019.
BERITA TERKAIT

In every place he visited, the Secretary General of the NasDem Party also reminded people about the active participation of the public in facing the digital era and the responsibility in using telecommunications.

"Be a civilized society in using the internet and social media. Do not use the ease of technology to spread hoaxes, slander, and hostility that divides the integrity of the Indonesian nation," Johnny said.

The community, he added, was also asked to play an active role.  Not only waiting for the results of development carried out by the central and regional governments but must be active in building with their respective abilities.

"Development will never be achieved without community participation. Let's move together," he explained.

NTT Deputy Governor Yosef Nae Soi on the same occasion reminded the people of NTT to maintain and care for all available natural resources, especially the diverse tourism potential that stretches almost evenly throughout the NTT region.

"Tourism destinations in this area must be successful for improving people's lives," Yosef explained.

NTT's birthday this time received an extraordinary reception from the community, especially the people of Sumba who are composed of four districts. In addition to promoting a variety of agricultural products and various woven cloths, the excitement of NTT’s Anniversary this time also received entertainment from the famous band, Slank.