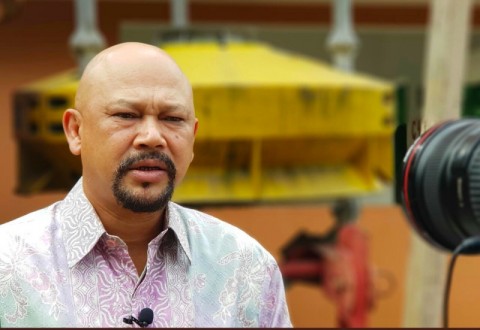 Head of BPPT Hammam Riza. Photo: Media Indonesia
Jakarta: The Agency for the Assessment and Application of Technology (BPPT) is collaborating with Japanese companies in cooperation to accelerate technology in the field of clean and environmentally friendly energy. Such would be technology development facilities for electric-based vehicle charging stations.

Head of BPPT Hammam Riza said that his agency continues to encourage efforts to utilize clean energy in various sectors. Starting from the construction of a Waste Power Plant which operates in Bantargebang.

The collaboration was carried out by signing a memorandum of understanding with the BPPT and Kyuden Mirai Energy Company Incorporated, a subsidiary of Kyushu Electric Power, an electric utility company from Japan as well as Awina Sinergy International, in Japan on October 9, 2019.
BERITA TERKAIT

Hammam also held a meeting with the Japan Agency for Marine-Earth Science and Technology (Jamstec). The meeting with the President of Jamstec, Tadashi Matsunaga discussed a lot about the use of technology. Starting from the aspect of natural disasters, both in terms of mitigation during disaster and post-disaster.

Disaster mitigation starts from the early warning system. Judging from the readiness of technology in the event of a disaster, the reliability of sensors as a support for early warning. Then for post-disaster, namely the development of food technology for disasters.

BPPT is focusing on developing the Indonesian Tsunami Early Warning System technology, which was implemented early in 2019. In the future, it is also planned to re-deploy tsunami buoys, as well as Cable Based Tsunameter (CBT).

"Previously in April 2019, we had installed a tsunami buoy in the Gunung Anak Krakatau area, the Sunda Strait. Henceforth will also be installed again in the waters of South Java to anticipate megathrust. We will also complement the early detection device with the installation of CBT," said Hammam.

Tadashi Matsunaga revealed that Jamstec is ready to support BPPT in conducting research and development of technological competence.

"Regarding disaster management, the knowledge related to the disaster itself also needs to be understood further. Therefore we are very happy to be able to share experiences with BPPT regarding disaster mitigation technology that we have done in Japan," Tadashi concluded.