Colloquium with NASA Researchers at ITB 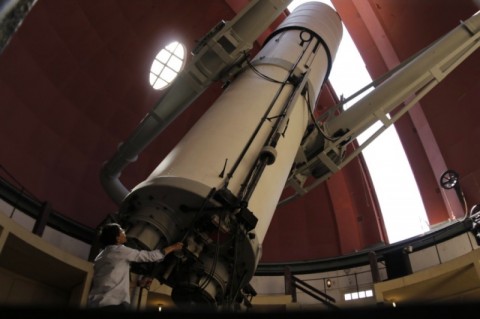 Zeiss telescope at Bosscha Observatorium. Photo: ITB
Bandung: NASA researcher Hakeem Oluseyi spoke at the "Hacking the Stars and Dark Matter" colloquium at the Bandung Institute of Technology (ITB) Convention Hall of the Center of Advanced Science Building (CAS). This colloquium is organized by KK Astronomy ITB in collaboration with the United States Embassy Jakarta and American Corner.

Olusey started the colloquium with a brief description of how the galaxy formation affects the properties of the galactic substructure itself. Then from there, it is expected to know the structure of galaxies from mapping potential galaxies with kinematics streams on halo galaxies.

The professor of Physics and Space Sciences at the Florida Institute of Technology also explained why the sun can throw its mass at a high enough speed. It also explains how astronomers understand the existence of dark matter from the bullet nebula phenomenon.

"If two galaxies pass each other,  the gas between them is retained, then from gravitational lensing, we can find out the existence of gravitational potential, which today is referred to as dark matter, "Oluseyi explained in an ITB press release, Bandung, Thursday, October 17, 2019.

Oluseyi also said that he studied stars to develop technology that could be used to study and understand galaxy formation. That way can find out how the universe is formed and developed.

As a NASA researcher and professor, Olusey's name is quite well known. He is famous for his expertise in various fields, such as Solar / Plasma Physics, Space Mission and Technology, Computation Modeling, Machine Learning, Ion Propulsion, to Science Education.

Meanwhile, ITB is the only tertiary institution in Indonesia that has an Astronomy Study Program at the Faculty of Mathematics and Natural Sciences. In addition, ITB also has a Bosscha Observatory which is a center for research, education, and development of Astronomy in Indonesia.