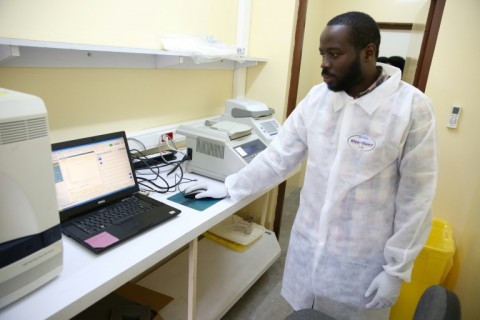 Viral sleuth: doctor Illich Mombo analyses the results of an Ebola test at the Franceville International Centre for Medical Research. (Photo:AFP/Steve Jordan)
Franceville: At a research facility in Gabon, one isolated building stands behind an electrified fence, under round-the-clock scrutiny by video cameras. The locked-down P4 lab is built to handle the world's most dangerous viruses, including Ebola.

"Only four people, three researchers and a technician, are authorised to go inside the P4," said virologist Illich Mombo, who is in charge of the lab, one of only two in all of Africa that is authorised to handle deadly Ebola, Marburg and Crimean-Congo haemorrhagic fever viruses. The other is in Johannesburg.
BERITA TERKAIT

The P4 was put up 800 metres (half a mile) distant from older buildings of the Franceville International Centre for Medical Research (CIRMF), in large grounds on the outskirts of Franceville, the chief city in the southeastern Haut-Ogooue province.

Filming the ultra-high-security lab or even taking photos is banned and the handful of people allowed inside have security badges. Backup power plants ensure an uninterruptable electricity supply. "Even the air that we breathe is filtered," Mombo explains.

When he goes into the P4 lab to work on a sample of suspect virus such as Ebola -- which has claimed 28 lives in the Democratic Republic of Congo (DRC) during an outbreak in the past six weeks -- Mombo wears a head-to-foot biohazard suit.

The special clothing is destroyed as soon as he has finished. Draconian measures are in force to prevent any risk of contamination, with potentially disastrous effects.

Once a suspect virus has been "inactivated" -- a technique that stops the sample from being contagious -- it is carefully taken from the P4 unit to other CIRMF laboratories in the compound, where it is analysed.

Specialised teams will scrutinise it, looking to confirm its strain of Ebola and hunting for clues such as the virus's ancestry and evolution, which are vital for tracking the spread of the disease.

CIRMF director Jean-Sylvain Koumba, a colonel in the Gabonese army and a military doctor, said lab teams had been "placed on alert" to handle Ebola samples sent on by the National Institute of Biomedical Resarch in the DRC capital Kinshasa.

The nature of the sample can be determined with rare precision, for the facility has state-of-the-art equipment matched in few other places worldwide.

"On average, it takes 24 to 48 hours between the time when a sample arrives and when we get the results," Mombo said.

Founded in 1979 by Gabon's late president Omar Bongo Ondimba to study national fertility rates, the CIRMF moved on to AIDS, malaria, cancer, viral diseases and the neglected tropical maladies that affect a billion people around the world, according to the WHO.

The centre is financed by the Gabonese state, whose main wealth is derived from oil exports, and gets help from France.

In all, 150 people work for the CIRMF and live on the huge premises. Its reputation draws scientists, students and apprentices from Asia, Europe and the United States, as well as Africa.

"(It) is dedicated to conduct medical research of the highest standard ... with unrivalled infrastructure, multiple sites and multidisciplinary teams."

The facility also conducts investigations into how lethal tropical pathogens are able to leap the species barrier, said Gael Darren Maganga, who helps run the unit studying the emergence of viral diseases.

"A passive watch consists of taking a sample from a dead animal after a request, while the active watch is when we go out ourselves to do fieldwork and take samples," he said.

A major centre of interest is the bat, seen as a potential "reservoir" -- a natural haven -- for the Ebola virus, said Maganga. Staff regularly go out all over Gabon to take samples of saliva, faecal matter and blood.

The consumption of monkey flesh and other bush meat is common practice in central Africa.

"It's still a hypothesis, but the transmission to human beings could be by direct contact, for instance by getting scratches (from a bat) in caves, or by handling apes which have been infected by bat saliva," he said. (AFP)