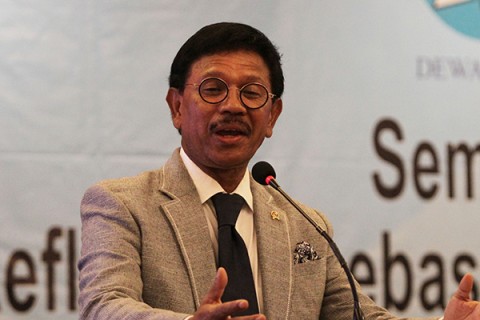 "Today, we just had a meeting related to the Country Strategy Dialogue, discussing sustainable energy to support industry and digital transformation," Plate remarked at the World Economic Forum (WEF) in Davos, Switzerland, on Wednesday (May 25) local time.
BERITA TERKAIT

At the forum, Plate noted that business partners, who have known Indonesia since long, showed huge interest in partaking in the government's major policies and plans to transition towards sustainable energy and digital transformation.

"I think the meeting at the World Economic Forum has many benefits in promoting Indonesia as a country that is very friendly for investment," Plate stated.

According to the minister, the potential for cooperation with global partners is strengthened by Indonesia's economic growth that has above-average valuations.

"Our economic growth is quite high, as it reached 5.01 percent in the first quarter, (and) of course, this is what attracts investment and support in finance infrastructure, especially green financing," he added.

Plate also stated that at least two global companies have shown strong interest in investing in Indonesia -- Schneider and Ericsson -- while adding that the latter company is interested in the development of 4G and 5G networks in Indonesia.

The valuation of Indonesia's digital economy, which is projected to be worth US$315 billion by 2030, is also a consideration for investors, he pointed out.

Furthermore, during his attendance at WEF, Plate was accompanied by Director General of Information and Public Communication, Usman Kansong, and President Director of the Telecommunications and Information Accessibility Agency (BAKTI), Anang Latif.