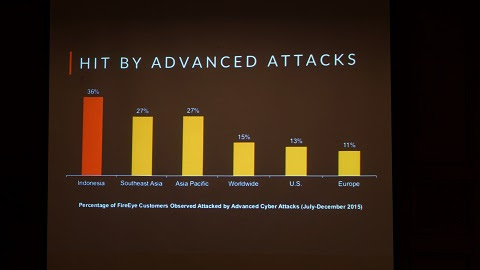 Cyber threat in Indonesia twice higher than global average
medcom.id, Jakarta: How big is cyber threat in Indonesia? The answer is quite worrying. According to survey from digital security company, FireEye, cyber threat in Indonesia is twice higher than the global average.
Not only that, FireEye mentioned that at least four hacker groups continuously attack Indonesian institutions. Three of which originated in China.
"It should be paid attention as it is closely related to economic and national security," said FireEye Asia Pacific's chief technology officer, Bryce Boland, Jakarta, Tuesday (4/19/2016).
"Tensions between nations are not only in politics, but also in the virtual world." he added.
Boland said that Indonesia has not dealt cyber threat seriously. Many institutions apply wrong measures by only detecting and preventing previous threats. They never trace and research the pattern to prevent a new one. The worst case scenario is if an institution does not realize their computer system have been breached and ready to be attacked.
According to Boland, the most important issue is how to make all institutions realize the danger of cyber threat. Furthermore, they should be able to manage the impact of an attack and minimize the damage.
"We are all facing potential attacks. The most important issue now is how to minimize loss when attacked," he concluded.