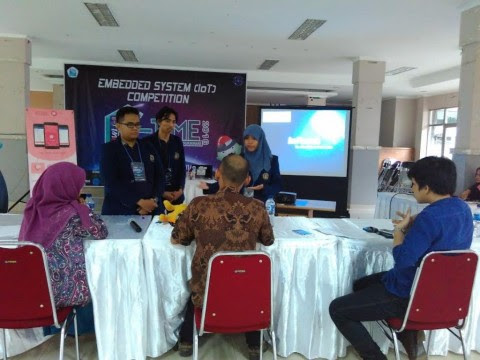 Photo:Istimewa)
medcom.id, Malang: Students from Faculty of Computer Science at Brawijaya University, Malang, creates smart device named Pet Feeder, or Peder. It is designed to assist busy pet owners.
"Peder is a smart device with the Internet of Things (IoT) technology. It assists pet owners in taking care of their animals when they leave the house for a long period of time," said one student, Rafi to Metrotvnews.com, Tuesday (4/19/2016).
The device is made of feeding hardware specially programmed to be functioned and controlled automatically through mobile applications.
Peder is made by installing four censors namely the ultrasonic distance censor, temperature censor, voice condenser censor and movement censor. These four censors are capable of presenting several features.
First, giving food to pets automatically according to the schedule set by owners. Secondly, users may monitor the activities of their pets such as their eating habits and health conditions through a mobile apps that could be downloaded in Google Play.
"The device will automatically release food for the pets when commanded through the mobile app, or according to arranged schedule. The amount of food given can also be arranged. Health condition may be reported from the pet's temperature," explained Rafi.
Rafi's personal experience prompted him to make the device as he often leaves his pet out of town. "If we put it in a pet shop, the cost is expensive," he said.
He and his two colleagues, Novia Ulfa N and Hedy Pamungkas were one of the winners in the E-TIME 2016 competition held recently at Jakarta Polytechnic College.
However, his group was not satisfied at that. Rafi intended to add more features in the device.
"The plan is to add features for pet food delivery. Therefore, busy owners do not have to worry when running out of pet food," he mentioned.